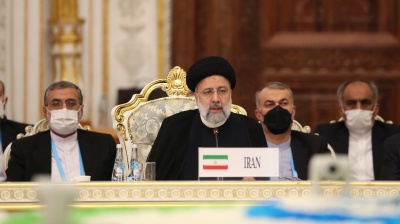 Raisi addresses the 21st annual summit of the SCO in Dushanbe. / president.ir
By bne IntelIiNews September 17, 2021

Russia, China and the other members of the Shanghai Cooperation Organisation (SCO) wasted no time in granting Iran de facto full membership of the Eurasian political, economic and security body on September 17.

Prior to the annual SCO summit, this year held in Tajikistan's capital Dushanbe, there was speculation that granting the membership could prove a long-winded process, but Tehran was quick to step forward with a resounding announcement that it had been made part of the increasingly influential club, with only technicalities to be dealt with before formal admission.

Apart from Russia and China, Iran—which has held observer status at the intergovernmental organisation for 15 years—will now also sit alongside India, Pakistan, Kazakhstan, Uzbekistan, Kyrgyzstan and Tajikistan in the SCO. The body was formed in 2001 by Moscow, Beijing and ex-Soviet Central Asian states. By now it covers towards half of the world’s population.

Iran will see its SCO participation as one in the eye for the US. The summit brought the first appearance abroad of Iran's new president, the hardline cleric Ebrahim Raisi who took office in August, and Raisi wasted no time in calling on the SCO members to help Tehran form a mechanism to avert sanctions imposed by the West.

Referring to sanctions in his summit speech as a form of “economic terrorism”, Raisi said Iran wanted closer ties with its regional neighbours and rejected Washington’s “unilateralism”.

The Raisi administration will now set out to use the recognition bestowed on Iran by the SCO in expanding political, economic and cultural ties with countries across the region. A key aim will be to strengthen the Islamic Republic's resistance to Western sanctions and strategies aimed at curtailing its role in the Middle East (particularly with an eye on its nuclear and ballistic missile programmes, hostility to Israel and roles, usually via surrogates, in various military conflicts).

“The world has entered a new era,” Raisi said. “Hegemony and unilateralism are failing. The international balance is moving toward multilateralism and redistribution of power to the benefit of independent countries.”

“Unilateral sanctions are not against only one country as it has become evident in recent years that sanctions have targeted more independent countries, especially members of the [SCO] organisation,” he said. Iran itself has endured heavy US sanctions since mid-2018 when ex-US president Donald Trump unilaterally walked out of the 2015 multilateral nuclear deal, or JCPOA, agreed between Iran and six world powers. The sanctions put the country through a bitter recession lasting nearly three years from which it is only now emerging.

Despite Iran’s dissatisfaction that the Joe Biden administration has so far continued with the sanctions against Iran that it inherited from Trump, the Raisi government has said it will agree to restart the Vienna talks. The talks are aimed at finding a path on which both Iran and the US could return to full compliance and participation in the nuclear deal. The deal was devised to provide verifiable guarantees that Iran’s nuclear programme stays entirely civilian in return for the dropping of major sanctions against Tehran. As well as Iran, China, Russia, the UK, France and Germany remain signatories to the accord.

In a jab at those who want Iran's nuclear development activities subjected to even more stringent curbs than the JCPOA achieves, Raisi cautioned that "nothing can stop Iran's peaceful nuclear activities that are within the framework of international regulations".