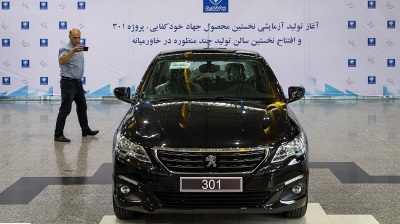 Iran's Peugeot 301 with no Peugeot-supplied parts could become a collector's item.
By bne IntelliNews July 19, 2019

Largest Iranian automaker Iran Khodro (IKCO) has started production of the Peugeot 301 sedan model, but purportedly without using any parts from the French motor giant behind the car, Groupe PSA, Fars News Agency has reported.

Groupe PSA units Peugeot, Citroen and DS Automobiles, along with fellow French car producer Renault, all invested in the Iranian market following the removal of international sanctions against Tehran triggered by the 2015 nuclear deal—but after US under Donald Trump returned to a sanctions policy against Iran in May 2018 they all gradually pulled out of Iran fearing they would be hit with US secondary penalties.

The newly produced Peugeot 301 model reportedly sources 60% of its parts from Iranian manufacturers, with the percentage expected to increase to 85% in the next few months.

IKCO CEO Hesham Yekke Zareh kicked off test production of the model on July 15 in a ceremony with government ministers.

Yekke Zareh said IKCO planned to begin mass production of the Peugeot 301 after the end of the current Iranian calendar year in March, adding that the company had directed €60mn worth of investment into the project.

“Some 100,000 units of this car will be produced in phase one and [annual production] will increase to 250,000 units in the next four years without any support from Peugeot,” he said.

Payment arrangement with Peugeot not known
Yekkeh Zareh insisted that the car would keep the logo and brand name of France’s Peugeot despite the fact that the company was seen as having reneged on its promises by leaving the Iranian market in June 2016. It is not known if Peugeot has agreed payments for the vehicles.

“Ultimately, these cars belong to Peugeot,” Yekkeh Zareh was cited as saying, adding that IKCO will launch similar production lines for the Peugeot 208 and 2008 models for which thousands of pre-orders have yet to be met.

Second largest Iranian automaker SAIPA Group, which signed a production deal with Citroen, has taken orders for a great deal of Citroen C3 models in Iran which it has been unable to deliver.

In May, the Iranian-backed Azermash automaking joint venture in Azerbaijan said production of the new Peugeot 207 would begin at its plant in Neftchala Industrial Zone in the summer.