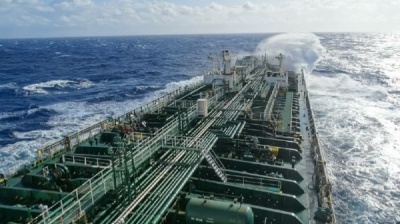 Iran is said to be thinking of sending two to three cargoes of fuel per month to Venezuela.
By bne IntelIiNews June 15, 2020

Iran is reportedly seeking to make its supplying of gasoline-starved Venezuela with fuel a permanent arrangement—partly so that the two nations can together defy US sanctions and partly so that the Iranians can offload a domestic oversupply of fuel.

Since April, Iran has sent five tankers shipping around 1.5mn barrels of gasoline to Nicolas Maduro government of Venezuela, which is suffering hours-long queues at fuel stations. From this point on, it is keen to send two to three cargoes a month in regular gasoline sales to its ally, sources have briefed Reuters.

The Trump administration, looking to cripple Iran’s energy export trade as part of its “maximum pressure” sanctions bid to secure a diminishing of the Islamic Republic’s role in Middle East affairs, and intent on bringing down “kleptocratic” Maduro who it claims has no democratic legitimacy, has warned ports, shipping companies and insurers against facilitating Venezuela-bound Iranian tankers.

But Tehran plans to keep up the shipments, according to five trading and industry sources close to the Iranian oil ministry cited by the news agency. Two of the sources said Iran’s powerful Islamic Revolutionary Guard Corps (IRGC), which answers to Supreme Leader Ayatollah Ali Khamenei, was determining policy on Venezuela.

“This is a long-term strategic decision made by the state to expand influence,” said one Iranian trader familiar with the policy, likening it to Iran’s cargoes for Syria.

A State Department spokesman said “the international business community should already be aware of the legal risk of any transactions with the illegitimate and tyrannical regime of Nicolas Maduro”.

Iran was a net gasoline importer for decades but last year it attained self-sufficiency with the third phase of its 350,000 barrels per day (b/d) Persian Gulf Star refinery in the port of Bandar Abbas.

Even before the impact on demand of the coronavirus (COVID-19) pandemic, oversupply of gasoline in Iran had reached 84,000 b/d in the last quarter of 2019, according to energy consultancy FGE.

Lacking the storage capacity to handle such a glut and exporting only five gasoline cargoes a month, to Asia and Africa, Iran was more than happy to meet Venezuela’s request for fuel, one of the sources quoted by Reuters said.

When the COVID-19 crisis passes and Iran’s domestic demand for fuel picks up to an estimated 550,000 b/d, Iran should still have the capacity to send two to three cargoes to Venezuela per month.

The authorities in Belarus have booked the Friendship Park in Minsk and say they will hold concerts there every day until August 8, the day before presidential elections, in a transparent move to prevent a second mass rally, the Minsk city government

With only a week to go before Belarus’ presidential election, polls are banned and exactly how popular each of the candidates is has remained a mystery. But one news outlet asked Belarusians to name their "favourite film" from six titles.

FPRI BMB Ukraine: A shaky ceasefire is holding in Donbas for the moment

A “comprehensive ceasefire” in Eastern Ukraine that was agreed to last week in Minsk officially started on August 2. There were immediately violations but the number of attacks by separatists has fallen significantly

Lukashenko cancels state of the nation speech as health fails

Belarus president Alexander Lukashenko cancelled his annual state of the nation speech that he was due to deliver on August 3 a week after he admitted to having the coronavirus (COVID-19).