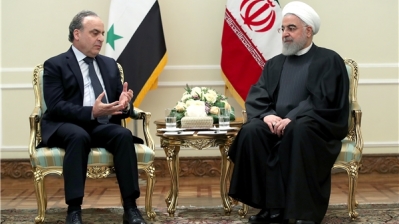 Iran has dismissed the proposal pushed by the UK that a “Trump deal” should replace the nuclear deal. The country’s president, Hassan Rouhani, on January 15 described it as a “strange” offer, noting that US President Donald Trump has gained a reputation for always breaking promises.

UK Prime Minister Boris Johnson on January 14 swung behind the idea of a “Trump deal” to resolve the standoff between Iran and the US.

Meanwhile, the severe damage the American “economic sanctions war” on Iran is inflicting on the Iranian economy was underlined as the International Institute of Finance (IIF), a finance industry body, said the Islamic Republic’s foreign reserves could drop to $73bn by March, marking a loss of almost $40bn in two years. The Iranian economy shrank by 4.6% in Iran’s 2018-2019 fiscal year and the contraction is expected by the IIF to deepen to 7.2% in the 2019/2020 fiscal year.

“I don’t know how he thinks”

In a televised speech to his cabinet, Rouhani addressed Johnson’s suggestion that the 2015 nuclear deal (formally known as the Joint Comprehensive Plan of Action, or JCPOA) could be replaced by an agreement drawn up by “great deal maker Trump”. He said: “This Mr. Prime Minister in London, I don’t know how he thinks. He says let’s put aside the nuclear deal and put the Trump plan in action. If you take the wrong step, it will be to your detriment. Pick the right path. The right path is to return to the nuclear deal.”

Rouhani also warned that European soldiers in the Middle East could be in danger after the UK, France and Germany—which along with Iran, Russia and China are the remaining signatories of the JCPOA following Trump’s decision in May 2018 to unilaterally withdraw the US from the accord—this week triggered a dispute resolution mechanism in the nuclear agreement that could lead to the reintroduction of UN sanctions on Tehran. “Today, the American soldier is in danger, tomorrow the European soldier could be in danger,” Rouhani said, adding: “American soldiers today are not secure in the region... We don’t want there to be insecurity in the world. We want you to go from here, but not with war. We want you to leave the region intelligently and it’s to your benefit.”

The day also saw the UK ambassador to Tehran leave Iran following his January 11 detention for three hours after he attended a candlelight vigil for the victims of the Ukrainian passenger plane downed by an Iranian missile battery in an apparent case of misidentification. Iran’s official IRNA news agency said the diplomat had left after being given what it described as “prior notice”. The report did not elaborate, but the ambassador, Rob Macaire, had already been described as a “persona non grata” by a spokesman for Iran’s judiciary. The British Foreign Office insisted that Macaire’s trip to London was "routine, business as usual" and was planned before his arrest. Macaire had argued that he departed the vigil where he was quite normally paying his respects as soon as he heard the start of a protest chant.

Trump pulled out of the JCPOA arguing that in return for sanctions relief it did not put tight enough curbs on Iran to prevent it moving towards the making of a nuclear weapon and did nothing to address the Iranian ballistic missile development programme and arming of militias and “terrorists” in conflict zones of the Middle East.

The European major power signatories defended the deal and told Iran that they would help defend it from the crushing sanctions Trump planned to use to strangle the Iranian economy to force Tehran to accept a tougher accord.

But in Iran’s eyes, the Europeans have done next to nothing to protect its economy from Trump. Thus, in a last ditch effort to press Europe to offer some meaningful assistance, Iran has in recent months gradually degraded its compliance with the JCPOA, culminating in its decision—days after the US drone strike assassination of Iran’s de facto military chief and second most important official, Major General Qasem Soleimani—to drop compliance with all nuclear deal restrictions on its enrichment of uranium.

Since that move, some European officials have briefed media that Iran could be less than a year away from developing the ability to build a nuclear bomb. Purportedly with such considerations in mind, and more in sorrow than anger, the European JCPOA signatories decided to activate the dispute resolution mechanism.

But some reports indicate other considerations also lay behind the move, described by Iran as “a strategic mistake”. On January 15, the Washington Post cited unnamed European officials as saying the Trump administration threatened to impose a 25% tariff on European automobile imports if Britain, France and Germany did not formally accuse Iran of breaking the nuclear deal.

US Treasury Secretary Steven Mnuchin said Washington now anticipated that the UN sanctions on Iran would “snap back into place” as a result of the European move. The European countries have said that is not their goal.

Russia has said it saw no grounds to trigger the dispute mechanism. Russian Foreign Minister Sergey Lavrov said on January 15 that Moscow has been urging Gulf countries to consider a common security mechanism for their region. He added it was time the world got rid of unilateral measures such as sanctions.

Reuters reported that French Foreign Minister Jean-Yves Le Drian told lawmakers on January 15 that the only way to resolve the crisis between the US and Iran was for Tehran to accept a broad negotiation and Washington to progressively reduce sanctions. He added that efforts by France and its European partners since September 2017 to open a new negotiation that would include Iran’s nuclear activities after 2025, its ballistic missile programme and its regional activities in return for a reduction of US sanctions was the only way forward.

“This platform is still there and is possible,” Le Drian said. “Today, it is the only solution to get out of the crisis.”

Speaking in Delhi on January 15, Iranian Foreign Minister, Mohammad Javad Zarif, was more upbeat than Rouhani as to the future of the nuclear deal. He argued that the dispute resolution mechanism was intended to resolve issues such as those raised and that the agreement was “not dead”.

The Guardian, meanwhile, cited Iranian state media as announcing that Iran’s supreme leader, Ayatollah Ali Khamenei, is due to deliver the sermon at this Friday’s prayers. He has not spoken at the prayers for eight years and is thought to only do so during critical periods. The last time he did so was in 2012 when he discussed the Arab Spring.

In the 2020-2021 agricultural season, Russian sugar plants with the combined capacity of 150,000 tonnes could halt production due to a 1.5-fold drop in prices.

The move came amid ongoing rumours about President Gurbanguly Berdimuhamedov’s alleged health issues and his efforts to groom his son, Serdar Berdimuhamedov, who is currently a lawmaker, as his successor.