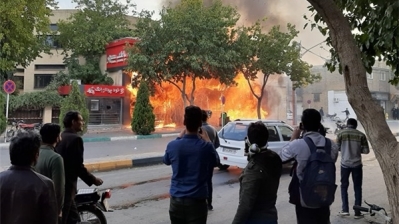 A petrol station set alight by protesters. This picture featured in a report by Iran's Fars News Agency which quoted the deputy mayor of Isfahan province as saying six petrol stations, 69 banks and 28 buses were torched in the province during the protests.
By bne IntelliNews November 18, 2019

Iranians remained almost entirely cut off from the internet for a third day as November 18 drew to a close with officials determined to prevent online activity that might fan the flames of the weekend’s ‘petrol hike’ protests that resulted in the death of at least six people and the burning of petrol stations, state banks and some municipal buildings.


Some reports based on videos obtained by human rights organisations and social-media videos point to the possibility that dozens of people were killed in the unrest, but there was no verification of such a scenario as things stood, especially with the lack of communication between various parties since the web blackout was imposed by Iran’s Supreme National Security Council on November 16. Some videos indicated that security forces may have shot live rounds at demonstrators. More than 1,000 people have been detained. The clashes seemed fiercest in the cities of Ahvaz and Shiraz. In Isfahan alone, 69 banks were torched, Iranian news agencies said.

Internet company Oracle said on Twitter that the disconnecting of the world wide web amounted to "the largest internet shutdown ever observed in Iran". Amir Rashidi, an internet security researcher with the New York-based Center for Human Rights in Iran, told RFE/RL that the extent and intensity of the shutdown was unprecedented. "During the protests [over the economy in December 2017 and early 2018], [authorities] did it gradually, they slowed the Internet, they increased the filtering, they blocked anti-filtering tools, and then finally they shut down the Internet for half an hour," he said. "But this time it was much more violent."

More than 100 banks and shops were set on fire during the demonstrations in dozens of towns and cities across the country, the semiofficial news agency Fars reported on November 17. But Commander Gholamreza Soleimani of the Basij paramilitary volunteer militia said on November 18 that the “main culprits” of the riots and protests across the country had been arrested, Mehr News Agency reported.

The Basij (Persian for “The Mobilisation”) is a large and omnipresent organisation under the Islamic Revolutionary Guard Corps (IRGC) which acts as the eyes and ears of the Islamic regime. It is headquartered inside mosques across the country.

Soleimani said the protesters could be split into two categories, namely those who protested against the minimum-50% petrol price rise—which Tehran said was brought in to raise revenue to help lower-income Iranians amid the sanctions-led “economic attack” Iran is under from the US—and those who were “enemies”.

“People started their demonstrations in peace in the morning [of Saturday November 16, which essentially is “Monday morning” according to the Iranian week format] but in the evening of the same day a wave of unrest was created with the support of the country’s enemies,” Soleimani added.

“On Sunday, conditions were rather stable all across the country and today the situation is more improved,” he said, adding: “Most of the troublemakers have been identified.”

In a statement on November 18, the IRGC warned protesters of "decisive" action if the unrest did not cease.

Ali Rabiei, a government spokesman, said the public had a right to protest, but did not have the right to support agitators.

Following the riots, Iranian President Hassan Rouhani announced that he had expedited subsistence payments for 60mn citizens that would start on November 18.

Hamid Baiidinejad, the Iranian ambassador to London, tweeted: “At a time of cruel sanctions and pressure on the people, the government is courageously pursuing an economic structural reform, demonstrating the confidence of the state and the nation, otherwise it would not be implemented.”

The near-total internet shutdown prompted calls for social media networks, including Twitter, to block accounts used by Iranian officials such as Supreme Leader Ayatollah Ali Khamenei. On November 17, while ordinary Iranians were forced offline, Khamenei's media team was able to post his comments about the protests on Twitter. He called those who had attacked public properties "thugs", with some engaged in “sabotage” for Iran’s enemies.