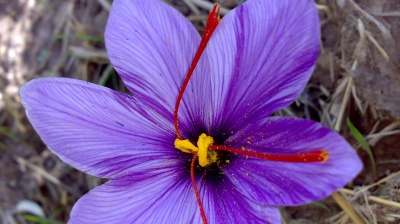 Assessed by weight, rare saffron is one of Iran's most valuable exports.
By bne IntelliNews October 21, 2019

Iran’s saffron farmers are expected to harvest some 430 tonnes of the prized flower threads used as a food seasoning and colouring agent in the current Persian calendar year (ends mid-March 2020), according to the Ministry of Agriculture said, as cited by Mehr News Agency on October 20.

A comparison of the low weight of saffron to its high value shows it is one of Iran’s most valuable export items after oil, petrochemicals, gas, automotive consignments and nuts. The Islamic Republic is the world’s biggest producer of saffron, accounting for more than 90% of global production. However, there is growing competition in the cultivation of the vivid crimson Crocus sativus from India and China.

In the 2018/2019 Persian year, which ended on March 20, exporters sold some €66.1mn of saffron to the international market, official data shows.

However, in recent years, due to the high value of the commodity, saffron smuggling to Europe and North America, using the ‘suitcase’ approach, has increased.

To boost the overall value of Iran’s saffron output and create a market for trading, saffron futures were launched on the Iran Mercantile Exchange (IME) in May 2018.

The idea of selling the lucrative commodity by the kilo on the exchange was long floated, and the move followed months of preparation. Government body approvals were needed before saffron could be upgraded to become a tradable commodity on the exchange.

US ‘has knee on Iran’s neck’ says Russia at UN

Russia’s UN Ambassador Vassily Nebenzia on June 30 accused the US at the UN Security Council of pursuing foreign policy against Iran in a way that was “like putting a knee to one’s neck” as ... more

An Afghan bank is set to open a branch in Iran’s Chabahar port Free Trade Zone (FTZ) on the Indian Ocean, IRNA has reported, quoting the Iranian energy minister as hinting at the development while ... more

An Iranian specialist at the European Council on Foreign Relations has said in ... more