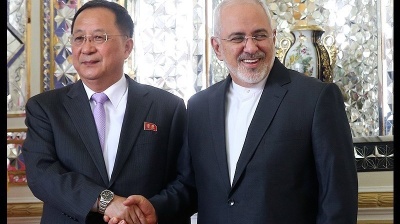 Zarif (right) has been involved in intensive diplomacy ahead of the US energy sanctions set to take effect on November 5. He is pictured with North Korean counterpart Ri Yong-ho in Tehran during a meeting in August.
By bne IntelliNews October 30, 2018

“A law-breaking country” is attempting to punish a country that is “abiding by law” in a move that will have “severe consequences for the world order”, Iranian Foreign Minister Mohammad Javad Zarif said in an attack on the US after a trilateral meeting with his Turkish and Azerbaijani counterparts in Istanbul on October 30.

Turkey and Azerbaijan—the president of which, Ilham Aliyev, described Iran as “like a brother” in mid-August—are expected to put up significant resistance to complying with Washington’s intensifying demand that third countries and foreign companies stop doing business with Iran. The Trump administration has adopted a policy of attempting to throttle the Islamic Republic’s economy with sanctions in an attempt to make the Iranians renegotiate their role in Middle East affairs, with some analysts convinced it is determined to push for regime change.

The US in early May pulled out of the multilateral nuclear deal with Iran, but the other major power signatories to the accord—the UK, France, Germany, China and Russia—have stayed in the agreement. They point out that there is no evidence that Iran has breached any of the deal’s conditions requiring it to limit its nuclear development programme.

Turning the screw
Washington reintroduced heavy sanctions against Iran’s currency trade, metals and auto sectors in August. On November 5, it will turn the screw by directing sanctions at the country’s oil, gas and petrochemical industries, which generate lifeline export revenues. Turkey, like largest buyer of Iranian oil China, has already stated it has no plans to cease buying Iranian gas and crude. Second largest buyer India is also expected to continue making substantial purchases. But the US says it will doggedly fight to gradually reduce Iran’s energy exports to zero.

“Unfortunately a law-breaking country [the US) seeks to punish a country [Iran] that is abiding by law... This method will have severe consequences for the world order,” Zarif was quoted as saying by the Iranian state news agency IRNA during his Istanbul visit.

However, Zarif—who ahead of the upcoming US energy sanctions has hardly paused for breath during whirlwind tours of diplomacy, and has lately met with counterparts including North Korea’s Ri Yong-ho in Tehran—added: “Americans have not achieved their goals by imposing illegal sanctions against Iran”.

Full compliance
Tehran says it has always been in full compliance with the nuclear accord, something which has been repeatedly confirmed by the UN atomic watchdog, International Atomic Energy Agency (IAEA).

Donald Trump objects that the deal, approved by predecessor Barack Obama, does not cover Iran’s ballistic missiles, participation by proxy in regional wars or what happens after the nuclear pact begins to expire in 2025.

“The world community has stood up to the US sanctions,” Zarif reportedly added after his trilateral meeting.

“The neighbouring countries and European nations have resisted against Washington’s unilateral measures,” he said.

The EU says it will soon at least “symbolically” launch a mechanism described as a special purpose vehicle (SPV) aimed at sidestepping the US financial system by using an EU intermediary to facilitate trade with Iran that theoretically will not be exposed to US secondary sanctions.

“That’s what happens”
US Secretary of State Mike Pompeo tweeted on October 30 that the Iranian economy was in decline, and said: “That’s what happens when the ruling regime steals from its people and invests in [Syrian President Bashar] Assad—instead of creating jobs for Iranians, they ruin the economy.”

However, the IMF has stated that it is the US sanctions that have pushed Iran into recession. Prior to Trump pulling out of the nuclear deal in favour of hitting the country hard with what he says will be unprecedentedly strong sanctions, Iran was on the growth path.

The economic attack on the country from Washington has also sparked roaring inflation and severely undermined the Iranian rial (IRR). It has lost 70% of its value in the year to date, with another weakening in recent days to around 150,000 to the dollar following a period of stability of around 140,000.

South Korea, one of Asia’s biggest buyers of Iranian oil but not likely to put up much resistance to Trump’s Iran policy given its reliance on Washington’s military backing in dealing with the nuclear threat from North Korea, said on October 31 that it had requested that the US grant it a “maximum flexibility” waiver to prevent South Korean companies from being impacted by US sanctions aimed at Tehran.

COMMENT: Will the US launch large scale war against Iran following the assassination of Qasem Soleimani

OUTLOOK 2020 Azerbaijan
COMMENT: Will the US launch large scale war against Iran following the assassination of Qasem Soleimani
Caucasus braces for conflict in neighbouring Iran