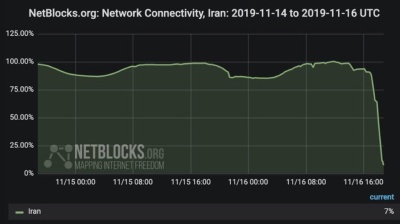 Iranian authorities shut down the internet entirely as part of a crackdown on petrol price protestors.
By bne IntelliNews November 17, 2019

Iranian authorities essentially turned the internet off on November 17 as a crackdown on protests against a dramatic hike in petrol prices escalated, Netblocks, an internet-freedom charity, said.

“Confirmed: #Iran is now in the midst of a near-total national internet shutdown; realtime network data show connectivity at 7% of ordinary levels after twelve hours of progressive network disconnections as public protests continue #IranProtests,” NetBlocks.org tweeted with a chart that showed Internet traffic crashing to next to nothing.

Iran has been on an effective total lockdown over the past 48 hours as most media entities went offline apart from the country’s state broadcaster IRIB and Press TV, who have access to unfiltered internet.

Protests continued across the country with reports of several dead and ongoing gunfire as people protested against a 300% increase in the price of petrol that was suddenly imposed on November 16. Grievances over fuel appear to have spurred many, already upset with the government’s handling of affairs, to take to the streets.

The decision to cut off access to the world wide web was made by the Supreme National Security Council of Iran and communicated to internet service providers overnight, one source close the government said.

Real-time network data show connectivity has fallen to just 7% of ordinary levels leaving only select places connected to the Internet in the country.

bne IntelliNews’ Tehran bureau ascertained that people were now switching their mobile connections down to 2G in some areas of the country, a movewhich allows limited access to the net.

“With over 300 networks disrupted, #Iran's internet shutdown is one of the most complex we've ever tracked. Simply switching it off took ~24 hours,” Netblocks director Alp Toker tweeted. “National connectivity now hovers at 5% with a few pockets of connectivity remaining to the outside world.”

Meanwhile, several internet users reported local news agencies, including the independent Iran Student News Agency, were resorting to messaging platforms including Telegram and Twitter to report the news as their websites remained offline.

The Tehran Grand Bazaar was reportedly closed on November 17, with people remaining at home to avoid conflict.