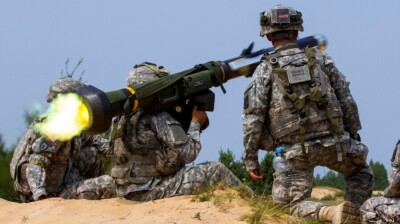 Ukraine is rapidly depleting its Soviet era weapons stockpiles as well as “burning through a week’s worth of anti-tank munitions every day”, according to Bloomberg.

Equipment losses estimated by MSNBC on April 6 assessed Ukraine as having lost 100% of its helicopters, 100% of its UAVs, 95% of its aircraft, 91% of its tanks, 56% of its air defence systems, 57% of its armoured vehicles and 43% of its artillery. Russian losses in these areas meanwhile, hover in the single and low double figures, according to the same estimates. It is the heavy weaponry, not javelins and stingers, that Ukraine is running low on.

The United States and its Western allies did not expect to equip Ukraine to fight this kind of conventional conflict against Russia, instead believing that Ukraine would collapse quickly, leaving behind an insurgency to fight off Russian occupiers. Ukraine's stiff resistance and battlefield success has proved otherwise, but how much longer can Kyiv sustain its heroic resistance?

Faced with diminishing stocks of its own Soviet era weaponry combined with the shrinking stocks of Soviet era weaponry from Nato member states arsenals in countries like Slovakia and Poland means Ukraine will start to rely on new Nato weapons. However, as Forbes writes, adapting to new weapons systems in peace time is difficult, and adapting to them in war time is unprecedented.

Some analysts have described Russian military doctrine as being more “Clausewitzian” in nature, based on the destruction of the co-belligerent's armies rather than the rapid capture of cities.

Duncan Spinner, a former British Army officer whose first job in the army was to defend North West Germany from Soviet armour, and who has lattery spent 4.5 years in Luhansk managing the OSCE operations, spoke to Bne about Russia's strategy in Ukraine. He describes a process of “fixing” their enemy, in other words denying them the freedom to manoeuvre. He believes that Russia has deliberately bypassed most major urban areas to focus on fixing Ukrainian forces in the Donbas, where they will try to encircle them and cut them off from reinforcement and resupply.

Duncan believes that the Russians are not operating on the timescale that the West believes them to be. We in the West are no longer thinking in grand strategy, focusing more on the principles of quick victories and overthrowing regimes. Time is for now, on Russia’s side, Duncan believes. “Ukraine had a lot of success hitting overstretched Russian logistics, especially in the North of the country, during the early days of the conflict. However, Russia has now been effectively targeting Ukraine’s fuel reserves while simultaneously “fixing” them in the Donbas, while the weather begins to get drier, favouring Russian armoured assaults.”

Ukraine’s finances are also increasingly under strain. Ukraine is asking the G7 nations for $50bn over the next six months to fill the holes in the state budget left ravaged by the war against Russia, Ukraine Business News reported on April 18.

Russia resumes oil supplies to Slovakia and Hungary but imports to Czechia remain halted
Poll shows every other Russian supports continuing the war against Ukraine
Ukraine will receive $5.5bn in support from the US later this month