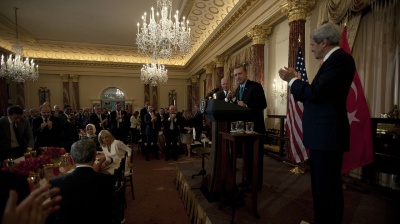 Things were a bit easier back then: Then US vice president Biden, left, applauds as Erdogan makes an address at the US Department of State in Washington, DC, in May, 2013.
By bne IntelIiNews January 19, 2021

Since Joe Biden won the November 2020 US presidential election, Turkey’s Recep Tayyip Erdogan has been widely seen as going on a charm offensive that signals to the incoming US president that he will tone down the aggressive Turkish foreign policy that was so readily tolerated by outgoing President Donald Trump.

However, the appointment by Biden—who in December 2019 described Erdogan to the New York Times as an “autocrat” and advocated supporting the Turkish opposition—of Brett McGurk as Middle East coordinator on his National Security Council has set alarm bells ringing in Turkey.

McGurk, who served as the counter-ISIS envoy under Barack Obama and then Trump, is seen as a firm critic of the Turkish government’s policies in the Middle East. He is also an outspoken advocate of the US partnership with the Kurdish-led Syrian Democratic Forces (SDF) which worked with US forces to defeat ISIS. In October 2019, Trump abandoned the SDF as he cleared the way for Turkey to make an incursion into northeast Syria to drive out Kurdish militia Ankara contended were “terrorists”. This treatment of a US ally that lost thousands of fighters in the battle against ISIS caused McGurk to quit.

The SDF is regarded by Turkey as the Syrian extension of the outlawed Kurdistan Workers’ Party (PKK), which has waged a decades-long insurgency against the Turkish state. Four years ago, the Erdogan administration called for McGurk to be removed from his post because of his close ties with the Syrian Kurdish YPG militia.

Two years ago, McGurk suggested Turkey might have been sheltering ISIS leader Abu Bakr al-Baghdadi. In 2019, McGurk, responding to a speech full of angry rhetoric from the Turkish president, tweeted: “Erdogan called on Muslims to 'unite against the West' at the very moment Turkey is hosting US-designated terrorist Ismail Haniyeh of Hamas in Istanbul."

On January 9, a critical op-ed by academic Talha Abdulrazaq was published on the website of Turkey's state-run TRT World network. The appointment of McGurk, Abdulrazaq wrote, meant “more terror to fight terror". Abdulrazaq also referred to McGurk as the mastermind behind the arming of the Syrian Kurds. “In the name of fighting ISIS, McGurk was the architect behind eschewing state actors and longtime Nato allies such as Turkey in favour of using terrorists to fight other terrorists in Syria,” he added.

During the Trump era, Erdogan has thrown his weight around and deployed soldiers and/or military hardware in Syria, Libya, Iraq, Nagorno-Karabakh and the eastern Mediterranean, with the latter region often the deployment area for Turkish warships protecting Turkish drill ships that Greece and Cyprus have accused of illegally exploring for gas resources in their waters.

Trump hardly batted an eyelid and became known for always taking Erdogan’s calls to the White House. Biden will not be so obliging and will have McGurk coordinating US policies across Syria, Iraq, Iran, Libya and other parts of the Middle East of key importance to Ankara.

However, Biden is very likely to try and accommodate Erdogan within his foreign policy due to the fact that Turkey—with the second largest armed forces in Nato—plays a vital role in the Middle East. He would not, for instance, want to give Erdogan no choice but to form a strong alliance with Russia.

Another difficulty facing Biden when it comes to forming a workable relationship with Erdogan are the Russian S-400 advanced missile defence systems acquired by Turkey in the face of objections from the US Congress, Nato and fellow Nato member states, which point out they could jeopardise the security of the Western allies’ military hardware.

Until almost the end of his presidency, Trump resisted hitting Erdogan with sanctions over the acquisition and when he did impose them he opted for a soft set of sanctions that are hardly any skin off Ankara’s nose—a vital let-off for Erdogan who knows all too well Turkey’s economy remains stuck on a precipice that hostile US policy could push it over.

The difficulty now is that Erdogan has never crossed the threshold of actually activating the S-400s and, if he did so, it might be seen as an embarrassment for Biden.

The Associated Press last week reported Turkish Defence Minister Hulusi Akar as calling on the new US administration to engage in a dialogue with Turkey and to review the decision to sanction the country over its purchase of the missile systems.

Washington has made it clear that the sanctions will not be dropped until Ankara disposes of the Russian technology, while Turkey knows there will be no way back into the F-35 stealth fighter jet manufacturing and development programme—and the consequent fulfilling of Turkey’s order for scores of the jets—unless it can give Biden a satisfactory way out of the S-400 headache. A worry is that Turkey’s S-400s could undermine the F-35 by recording performance data.

Speaking to reporters on January 13, Akar would not be drawn on the question of whether Turkey would consider disposing of the S-400s, but he said he was hopeful that a solution can be found “through common sense before coming to that point”.

Akar also said talks with Russia on acquiring a second consignment of the S-400s were continuing.

Turkey maintains that the S-400s would not affect Nato systems or the F-35s. “We are saying let’s not break things up in this way. Let’s sit down and talk and find a solution,” Akar said.

Asked whether Turkey was considering purchasing Russian-made jets following its removal from the US fighter jet program, Akar said Turkey wanted to “return to the F-35 programme” and develop its own national fighter jet programme and modernise its fleet of F-16 planes.

Petrostates to lose trillions of dollars in revenues amid clean energy push: report

US accepts invitation to nuclear deal talks with Iran hosted by EU
Erdogan in spat with US over response to reported Kurdish killing of Turkish hostages
Petrostates to lose trillions of dollars in revenues amid clean energy push: report