ISTANBUL BLOG: Erdogan’s field is economics. All bets on Turkish inflation are off 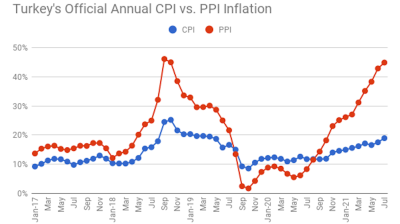 TUIK’s CPI inflation says "day", PPI inflation says "night". Are those calling the shots on CPI forgetting PPI? Not that PPI reflects the economic reality either, but why is the CPI-PPI spread breaking records? Just one of many unexplainable points in Turkey’s political-statistical reporting.
By Akin Nazli in Belgrade August 18, 2021

Turkish President Recep Tayyip Erdogan, wont to reiterate “I’m an economist” or “My field’s economics,” was lately live on TV together with some of his devotees. The discussion was about how great Turkey was doing. The dear leader generously thanked the participants for their “analysis” and then provided some of his own “information” on just how great Turkey was doing.

At one point, one of the participants steered the conversation to the issue of economic growth. The economy, he stated, was his field. So there were at least two people present who saw the economy as their field.

The hack talked about the big official growth figures that Turkey was releasing. Erdogan congratulated his “associate” in the field of economy for his observations and took the conversation on to inflation and interest rates.

Erdogan’s Turkish is not too easy to fathom and it is a problem that he cannot speak any other language. In the good old days, he used to talk impenetrably, since he is a great politician.

His servants used to froth: “What did Erdogan mean?” “Did he mean this, or this?”

Having this kind of open ground for speculation provides opportunities for genius in coming up with the most unlikely possibilities. Thus, talking nonsense is always a good tool for fooling and stalling the slaves.

However, just recently, the lack of words issuing from Erdogan’s mouth has led to the question of whether Turkey’s leader is opting not to speak, or is in some way struggling with his concentration and is unable to speak at length or with much coherence.

Whatever the case may be, let’s attempt a translation of Erdogan's last 'Erdoganomic' utterings on inflation and interest rates:

“When it comes to inflation, I, particularly at this moment, when we leave, inshallah, the month of August behind, we’ll see a fall in inflation that also goes back into August.

“But, what would be the rate from this [decrease]? One, it will be much, much below the [level] we’re at now. On this particularly, on this point here… I’d give my signal, presumably, to some places [Turkey’s official statistical institute TUIK?—Ed].

“Because, it’s not possible for inflation to go higher from here. Because, also in interest rates, we’re going into a decline. And, high inflation, no.

“And, together also with the month of August, we’ll turn to, inshallah, low inflation.”

It was on August 4 when Erdogan came up with this; a ramble, but at the same time, a ramble in which the message was unmistakable. Based on his idiosyncratic theories on how inflation and interest rates play off each other, and his latest “guidance”, the central bank should have cut its 19% policy rate on August 12 at its rate-setting meeting to commence a new easing cycle, with the TUIK to then, on September 3, release official annual CPI inflation for August at a lower figure than the 18.95% published for July.

Please pay good attention here: official inflation is not at 19%, on the Erdogan discount market it stands at 18.95%.

As things turned out, the market would not take Erdogan seriously. And it was proven right on August 12 as the central bank kept its policy rate at 19%.

The beneficial aspect of Erdogan’s remarks on August 4 was that the market did not have the chance to demand a rate hike on August 12 as the Erdogan discount market spread between the policy rate and official inflation showed 5 bps.

It would be nice to think that Erdogan, the TUIK and the central bank were performing some kind of sham fight to curb the market’s demands for rate hikes. However, such conscious smarts and the ability to plan and coordinate such a diversion have unfortunately not existed in Ankara for a long time.

For the next stop, we can now circle September 3, when the TUIK will release its inflation data for August. Based on Erdogan’s “guidance”, let’s recall, official annual inflation for August should come in “much, much lower.”

Sahap Kavcioglu, appointed central bank governor in March, stated and restated in April that inflation was set to peak at around 17% in April before easing.

The disparity ratio between Turkish inflation as calculated by ENAG (Istanbul's Inflation Research Group, headed by academics) and TUIK’s official inflation (ENAG-to-Official in the chart) jumped to a record in May. The TUIK then stepped back in June and July.

Despite the market’s demands for recognition of rising inflation, the Erdogan administration attempted to push forward with Plan A.

The thinking was that a rate cut was on the way at the July 14 meeting in the wake of the June inflation release, put out on July 5, confirming a declining trend in official inflation.

However, the government bowed to market realities and the market’s demands by releasing official inflation at 17.53% for June. Plan A ended up in the dustbin and market players searched around for guidance on the administration’s new thinking until August 4 when Erdogan talked.

Presently, Turkey’s official CPI index data does not suggest a declining trend in official annual inflation will be seen before November. At the same time, there is a tension in that the central bank chief, as far back as May, promised Erdogan that rate cuts were in the making for July and August.

September 3, which brings the August inflation release, is now the next stop for curiosity to see whether Erdogan will attempt to push his luck.

Turkey’s lira, so often in the news for smashing through unfavourable records, has notably been, in recent weeks, on relatively good behaviour. That could be positive for a story that could suggest a limited decline in official inflation for November and December.

On August 3, Haluk Burumcekci of Burumcekci Consulting, said: “Even without a loss in lira value [from the 8.35-8.65 band seen in the USD/TRY pair since July], inflation may rise to 19-20% in the next three months [August, September, October], with a fall coming only in the final two months [November, December] to end the year at 17-18% at best. If the value-added tax discount due to end in September was not extended, this could exert an upward impact of around 1 percentage point.”

Burumcekci anticipated that the policy rate will end the year at 19%.

If your field is economics, you may not be able to see which way this is going.