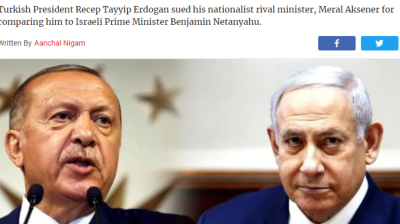 Crass from the past: The newspaper archives are littered with Erdogan-Netanyahu bickering and battles gone by, such as this one reported by RepublicWorld.com in May last year. / bne IntelliNews
By Akin Nazli in Belgrade November 19, 2022

In case you missed it, take note that this week brought a phone call between Turkey’s president, Recep Tayyip Erdogan, and Israeli PM-elect Benjamin “Bibi” Netanyahu.

Their excellencies exchanged condolences over the recent terror attacks in Istanbul and the West Bank.

Netanyahu lost the Israeli PM post in June last year. He’s back, having won recent elections. While he was missing, Erdogan reinstated normal relations between Turkey and Israel.

Lately, the IR (international relations) crowd has been speculating on whether Erdogan and Netanyahu will descend back into the pit of wrath and insults in which they used to so often rile each other. But it seems that they are both in a good mood.

Netanyahu has to regularly kill some Palestinians to remain in power. Erdogan’s gambit is to issue harsh words and yell his ire. It works a treat in relaxing the masses who get angry over the global silence that meets Israel’s murderous actions against the Palestinians.

“Once he [Erdogan] used to call me Hitler every three hours, now it’s every six hours but thank God trade [between Israel and Turkey] is up,” Netanyahu said in 2020, describing the IR game between him and Erdogan.

It was in 2018 when Erdogan expelled the Israeli ambassador after Netanyahu switched the Israeli capital to Jerusalem. In August this year, Turkey and Israel agreed to once more exchange ambassadors.

In 2002, when Erdogan’s Justice and Development Party (AKP) won the elections in Turkey, Israel was among the biggest supporters of the AKP. It was from 2009 that things turned sour.

At the end of the so-called Arab Spring, which included a series of uprisings and armed rebellions, amid major public tensions between Erdogan and Israel, all threats against Israel in the region were destroyed. Erdogan particularly served for the destruction of Syria.

Currently, the Biden administration demands that US proxies refrain from squabbling and brawling with each other while the US focuses on China. Helpfully, Israel is in good spirits when it comes to all the Arab states in the Middle East, following a half century of ugly quarrels.

Erdogan, meanwhile, is putting on the swell guy act, mending relations with Saudi Arabia, the UAE, Egypt and, to an extent where his moves don’t upset “brother ally” Azerbaijan, Armenia.

With Turkey and Israel talking again, many eyes return to the likely future of the envisaged pipeline running from Israel’s natural gas fields in the Eastern Mediterranean. It is a gummed-up issue. The costs would be high. There again, gas prices are presently high. The pipeline would be feasible if it ran through Turkey. However, there is no guarantee that gas prices will remain at their current levels.

The alternative route across the seabed to Cyprus and then Greece is actually not an alternative given eye-watering costs.

When Israel first found its gas, in 2010, the plan advanced was for a pipeline via Turkey. But the plan was cancelled. The Israelis did not want to deal with Erdogan’s caprices in addition to the feasibility problems.

Much of the betting is now on Israel getting its gas to market after liquefaction. Liquefied natural gas (LNG) shipped from terminals is all the rage right now.

Still, Turkey would like a piece of the pie. The soap opera surrounding the proposed pipeline probably has some way to run. It’s just hard to imagine Erdogan and Netanyahu beaming beatifically, stood side by side, cutting the ribbon.

ISTANBUL BLOG: Erdogan’s talking rate cuts again. There are those who are bored stiff by these joke economics
ISTANBUL BLOG: Mess of information as officials fail to logically explain bomb attack
ISTANBUL BLOG: Suicide attack in Turkey awakens ghosts that promise violence ahead of elections