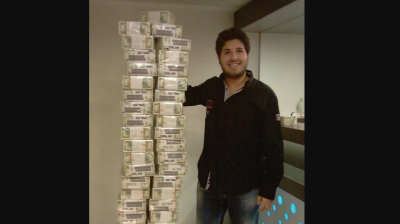 Who'll be the next Reza Zarrab? / Screenshot.
By Akin Nazli in Belgrade August 22, 2022

It’s a piece of news that's long been in the pipeline—Turkey has in the year to date expanded its oil imports from Russia, including Urals and Siberian Light grades, to more than 200,000 barrels per day (around 11,000 tonnes) from 98,000 bpd in the same period of 2021. Reuters reported the data on August 22.

[Article photo: Who will be the next Reza Zarrab?].

Turkey has two oil refiners. The biggest, Tupras (TUPRS), bought 111,000 bpd of Russian oil from January to August, up from 45,000 bpd in the same period of last year, while the smaller player, Star Refinery, owned by the State Oil Company of the Azerbaijan Republic (Socar), bought 90,000 bpd, up from 48,000 bpd a year ago.

Socar holds a stake in the production of Russian Urals and Siberian Light.

As of August 22, Brent was up 46% y/y to $97 while the Urals-Brent price difference (based on the rolling average of the last five days) stood at minus $25.

According to the latest data provided by Turkey’s energy watchdog EPDK, Russia became Turkey’s top source for crude oil in May.

The British media has lately put out multiple reports that some Western officials are not happy with how the Turkish regime of Recep Tayyip Erdogan is indulging in Ukraine war sanctions-busting schemes with Russia. The stories of served “warnings” and “irked” Western capitals have spread from the dominant media players to the smaller organs. If this media admonishment continues, the Erdogan camp will definitely stop evading the Russia sanctions, you might think. Think again. The mainstream media is a tool used by states everywhere. They do not care about their cheap fare. That’s how they get to earn their crust.

The “trade-off” is among the main concepts in economics. The trade-off was born in the UK. Revisiting the literature that started with Adam Smith will help one fathom how cheap headlines are a waste of paper, bandwidth and time when the law of trade-off rules.

The desperate Brexiteers looking for new commerce to address the grievous wound they have inflicted on their country have long looked at Turkey, a fellow thorn in the side of the European project, as most promising, while there are other calculations at play too—standing aside, offering nothing of your own, while Turkey’s military forces are inserted into every conflict from Syria to Karabakh to Libya while at the same time preventing Erdogan from breaching the Russia sanctions is a no-no. It would be against the law of trade-off.

At the end of the day, making bargains with unravelling Europe, EU or non-EU, is a waste of time. Europe is not turning into a huge battlefield for the third time just because the US has to deal with China.

As for the US’s approach to Erdogan working around the sanctions and other mischievous and egregious behaviour, the US shares in the same trade-offs as its little cousins in Europe.

On August 19, the US Treasury issued a statement treated by some media as if it was a bombshell. The effect was actually more like that of a whoopee cushion. US Deputy Treasury Secretary Wally Adeyemo advised Turkish Deputy Finance Minister Yunus Elitas that Russian entities and individuals were seeking to use Turkey to bypass Western sanctions. You don't say! Elitas must have been rocked back on his heels.

Veritably, the US Treasury has the eyes of a hawk. Adeyemo should call the Kremlin with information that there are Russian forces guilty of killing thousands of innocents in Ukraine.

The mainstream media is obliged to embarrass itself. What are sanctions? Do they make sense? Is Erdogan scorning US sanctions for the first time? What is Halkbank (HALKB)? Who is Reza Zarrab? Would it make sense for the US to sanction Turkey for ignoring the Russia sanctions?

Chart drawn by Reza Zarrab during his New York court hearing. It shows how oil, gas, money and gold flowed in the sanctions-busting scheme it is alleged that Turkey organised with Iran.

The US, lest we forget, in April last year sanctioned some Turkish officials for buying S-400 missiles from Russia. Ismail Demir, head of Erdogan’s defence agency, was among those designated.

In June, Demir gave an interview to The Wall Street Journal. He talked about the trade in armed drones, Ukraine and such matters. Right now, Ukraine’s allies are all for Turkey providing Kyiv with Erdogan drones. Demir can walk around wearing his US designation like a curious gong.