ISTANBUL BLOG: Turkey’s official inflation – nothing if not a head-scratcher 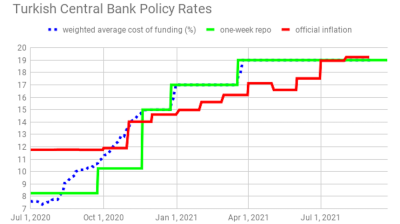 Turkey’s official annual inflation in August moved up to 19.25% from July’s 18.95%, despite market consensus expectations that it would fall very slightly and, more intriguingly, despite President Recep Tayyip Erdogan having stated that in the pursuit of low inflation “the month of August is the turning point”.

In Turkey, the official data on inflation, growth and other key indicators have a habit of being almost exactly in tune with what Erdogan predicts, so it is hard to fathom what is afoot this time round. Erdogan also anticipated that the central bank’s policy rate of 19% would be cut in August—the markets have come to regard Erdogan as at the helm of Turkish monetary policy—yet the rate was kept constant by the central bankers.

To recall, back in March the previous central bank governor was reportedly fired after he annoyed Erdogan by hiking the policy rate to where it stands now. But if that is correct, how is it that his successor still has his job despite not having cut the rate?

This blog has often noted that in Turkey when “unnamed Turkish officials” brief international news services on so-called behind-the-scenes thinking it is so very often only for manipulation. When the number of anonymous officials singing from the same song sheet rises to half a dozen or more, it is not the case that the information in question can be said to have been confirmed by many different sources; nope, this actually confirms that there is official discourse that has been quite deliberately put into circulation.

The pursuit for the logic behind occurrences in Turkish politics takes one on to treacherous ground. Thus, a move for revenge made by Berat Albayrak—Erdogan’s son-in-law and the previous finance minister, who fell on his sword late last year at a point when Turkey was in danger of another balance of payments crisis—might have been the real reason for the firing of the previous central bank chief rather than the explanation that went into circulation, namely that he failed to ease rates. But the Albayrak explanation is also just speculation. Finding reliable information on the workings of the Erdogan regime is a tough call.

Turkey’s official data releases can similarly take you into something of a maze. You may see the inflation figure hovering around the policy rate, but remember, this is the official inflation number we are talking about; it has little relation to the reality of price growth that is a painful everyday experience for ordinary Turks up and down the country.

Istanbul's Inflation Research Group (ENAG), headed by academics, has been compiling its own inflation data based on the methodology of the official statistical institute, TUIK, since August 2020. Its August inflation release shows monthly inflation at 4.06% versus the TUIK’s 1.12%.

Having been researching inflation for a year by now, ENAG had a chance to release an annual inflation figure for the first time, but nothing appeared in its bulletin. This group, a real thorn in the side of the government, is of course subject to an ongoing criminal probe following a complaint from TUIK.

Nevertheless, we can calculate that the annual inflation rate for August this year implied by ENAG’s releases since August last year stands at around 49% y/y.

It would be nice if the only abnormality in Turkey’s inflation presentations was the consecutive record spreads between the official consumer price index (CPI) and producer price index (PPI) inflation figures.

To get a taste of the real price increases that the Turks are experiencing, take a look at what’s facing construction industry contractors, once celebrated for driving a Turkish growth boom. They have lately been up in arms over a 200% y/y increase in the cost of cement.

There’s a similar picture with electricity, while there is no disputing soaring prices in food and basic consumption goods, at least not for anyone who goes through the sobering experience of entering a Turkish supermarket.

Vehicle prices recently declined after a tax cut but they have doubled since last year. BloombergHT reported the TUIK’s official passenger car price declined by 3.4% m/m in August. It did not draw attention to the annual price change, but its chart showed that the TUIK price rose to TRY293,000 in August from about TRY150,000 a year ago.

The reality, you will gather, is far ruder than the official picture, but nevertheless we must return our focus to the policy rate, with the next rate-setting meeting scheduled for September 23.

Of late, the market has, interestingly, been going easy on Ankara’s monetary policy. It took a dose of Erdogan’s guidance to produce the consensus expectation for official August inflation of 18.75%, rather than weighing up basic logic and doing some elementary mathematics. But the TUIK’s released figure of 19.25% (the highest official inflation reading since April 2019) has thrown the market a curveball and the prevailing anticipation is that the September 23 central bank policy meeting will hold rates, even though official inflation is now above the policy rate.

Turkey’s lira, meanwhile, so often in the news for smashing through unfavourable records, remains on good behaviour, leaving scope for a story that could suggest a limited decline in official inflation in November and December.

November is indeed a critical juncture as the lira could get into some difficulties prior to the new year market rally that should begin in December.

On December 3, the official inflation data for November will be released.

The next inflation release is scheduled for October 4, when the official movement in September’s prices will be relayed.

As things stand, guidance put out by Haluk Burumcekci of Burumcekci Consulting still holds. On August 3, Burumcekci said: “Even without a loss in lira value [from the 8.25-8.65 band seen in the USD/TRY pair since July], inflation may rise to 19-20% in the next three months [August, September, October], with a fall coming only in the final two months [November, December] to end the year at 17-18% at best. If the value-added tax discount due to end in September was not extended, this could exert an upward impact of around 1 percentage point.”

Burumcekci anticipated that the policy rate will end the year at 19% although the market remains positive for limited 50bp cuts from the last two monetary policy meetings, set for November 18 and December 16.

On October 28, the central bank will release its latest quarterly inflation report and updated inflation forecast.