ISTANBUL BLOG: Turkey's virus disaster. Where does one start? 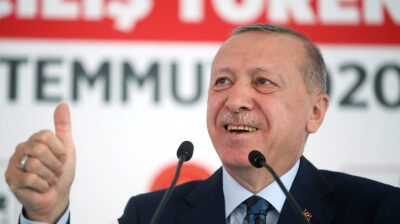 If you were the president and you weren't responsible for the economic morass, the incinerated FX reserves, the lousy lira or the virus disaster, you'd keep smiling too.
By Akin Nazli November 30, 2020

The officially logged cases did not even include the results of tests for the virus carried out in hospitals, Bulut said, adding: “We can safely say even now [at a point after the health ministry last week agreed to start adding asymptomatic cases to its daily figures] that this 28,000 figure does not reflect the truth.”

“The truth has a habit of coming out,” TTB head Sebnem Korur Fincanci said during a press conference held with Bulut.

She reiterated the TTB’s call for a lockdown of two to four weeks that would include non-essential workplaces.

Turkey’s hospitals are acutely overstretched, medical staff are burnt out and the contact tracers, once credited for keeping the outbreak in check, are struggling to track transmissions, according to Fincanci.

Meanwhile, there is talk that Turkey has ramped up its official COVID-19 figures, by including symptom-free cases, to obtain vaccines since vaccines will be distributed based on countries’ risk categories.

If that’s correct, that’s terrific because it appears that the Erdogan administration was putting out low figures across the summer tourism season that allowed countries including the UK and Germany to advise their citizens they could freely travel to splash some hard currency in Turkish holiday hot spots, while now it is issuing high figures that will open the way to vaccine deliveries. The conclusion has to be that Turkey’s officials are truly blessed with serendipity.

Despite all the hullabaloo in the EU over the demand for sanctions against Ankara, largely caused by indignant France, the German establishment and government rarely move against Turkey thanks to its huge market of 84mn people and Turkish President Recep Tayyip Erdogan’s menacing refugee card (as soon as he needs to put real pressure on Berlin and the EU, he sends waves of refugees desperate to get into Europe towards the Greek border). Trade unionists at Volkswagen who raised a hue and cry over the auto giant’s now abandoned plan to build a factory in Turkey may denounce alleged Turkish war crimes in Syria, but you hardly hear a squeak from Angela Merkel.

Germany does at least have a media that raises these matters, while even Russia and Israel have institutions that react against their governments’ associations with criminals. In Turkey, Erdogan has even hinted he will have the TTB shut down for challenging the official portrayal of the country’s coronavirus outbreak.

Ah yes, the pesky pandemic. Let’s get back to that shall we. Almost every day now, Istanbul Mayor Ekrem Imamoglu, a politician ranged in opposition to Erdogan’s AKP party, reiterates that the COVID-19-related daily death toll in Istanbul is higher than the countrywide virus death toll as given by health ministry officials (and news just in, as if the picture wasn't awful enough already. A data analyst who looked at the health ministry data found that the total figures for cases, deaths, tests and recovered patients rarely end in 0, which is statistically unlikely to happen randomly).

Erdogan—the perspicacious president currently being sold as the man who was not informed that his now fired son-in-law finance minister had sent the central bank’s FX reserves up in smoke in a foolish and failed bid to defend the lira—was blameless again on November 27. “The primary responsibility for this business [the COVID-19 outbreak] belongs to the science council,” he said.

The sheer number of implausible statements and even pure lies put out by the Erdogan regime that effortlessly make their way into mainstream and international media never ceases to amaze. It’s not as if Erdogan’s “Ministry of Truth” is run by evil geniuses such as Joseph Goebbels.

President Erdogan has never appeared butt naked on the balcony of the presidential palace.

BEYOND THE BOSPORUS: Pa! Sanctions, schmanctions!