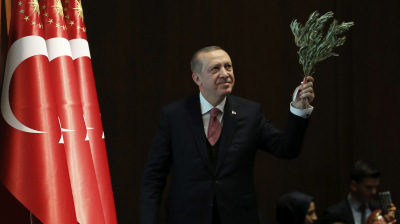 On August 4, President Recep Tayyip Erdogan stated that growth in 2021 was on course to exceed 7%.
By Akin Nazli in Belgrade August 21, 2021

Since early spring, when Turkey’s official 2020 GDP growth figure was posted at 1.8%—despite the pandemic impact and growing poverty and hunger in a country mired in a swamp of economic mismanagement—this blog has been advising that public “bidding” on official 2021 growth would come on stronger and stronger in the run-up to March 2022, when the 2021 data will be released.

On August 20, finance minister Lutfi Elvan said the government now expects 2021 growth at over 8%. What’s more, the current account deficit was forecast by top officials to come in at 3% of GDP and the budget deficit at 3.5% of GDP.

Elvan also said that new lending campaigns under the state’s Credit Guarantee Fund (KGF) are to be launched. (Hitmen and cheap pawn brokers in the finance industry have lately staged some attempts at frothing up Turkey’s loan growth. Some momentum has been seen, but a sharp jump is not visible as yet.)

The official target for growth in 2021 in the government’s medium-term programme still stands at 5.8%.

The government is supposed to revise the programme in September, but in recent years it has stalled the revision to October.

Previously, on August 4, President Recep Tayyip Erdogan stated that growth in 2021 was on course to exceed 7%.

Then came Fitch Ratings with a hike in expectations for 7.9% from the 6.3% it was anticipating in June, with Turkey’s trade minister Mehmet Mus on August 14 subsequently joining the bidding, talking of a release that would beat 8%.

On August 18, Erdogan, who has recently been holding evening chats with his party hacks on TV rather too often, reiterated that the previous 5.8% official target would be left in the dust.

On August 9, Spanish lender BBVA, which controls one of Turkey’s top banks, Garanti BBVA, took a proactive step, shooting for 9% “with risks still on the upside.”

It’s intolerable. So, this newsdesk is moving one step ahead of everyone. Our forecast has been moved into the double digits.

Meanwhile, the consensus among top officials, from the ministers to the president, is that the 2Q 2021 official GDP expansion will be released in the 20%s.

National statistical office TUIK (aka TurkStat) will release the Q2 data on September 1.

Lest you haven’t picked up on this yet, let’s mention once again that from the general public to analysts to academics, the past couple of years has seen intensifying mistrust expressed towards Turkey’s official economic data; the reliability of much of TUIK’s data, the ministry’s budget data and the central bank’s balance of payments data is questioned more and more frequently.

On August 19, the central bank revised its data sets on the external debt, net international investment position (IIP), real sector FX position and portfolio flows. It’s a pity. We used to at least make use of the weekly portfolio flows, assuming that the data was reliable.

There’s really no need to wonder: yes, all the data set revisions produced positive results. But nobody should be fooled. Turkey all too clearly remains in desperate straits.