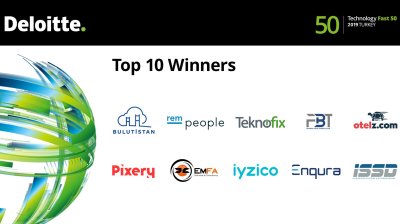 Companies which saw revenues at higher than €50mn in the 2018 financial year were ranked in the Big Stars category based on their revenue growth across the past four years.

Logo Yazilim, established in 1984, increased its consolidated revenues by 24% y/y to Turkish lira (TRY) 268mn and its net income by 9% y/y to TRY57mn in January-September 2019, according to its latest financials.

Some 37 of the 50 named companies were active in the software sector, four in fintech, three in hardware and two in environmental technologies.

Average revenue growth stood at 748% while 11% of revenues on average came from exports.

A total of 24 companies were between five and 10 years-old while four were older than 20.

Paycell, led by a woman, received the Woman in Tech Award, a debut category focused on companies with more female employees than male that also qualify in terms of turnover growth.

Teknasyon received the Cross Border Award. This is another debut category, with the competitors made up of companies that export higher than 50% of their total sales.

Borsa Istanbul-listed Kron Telekom made the top 50 list for the second year in a row.

Inveon won a place on the list for the third year in a row.

The companies will compete in the Deloitte Technology Fast 500 EMEA programme.

Draxlmaier plans to build the first battery factory for electric cars in Romania, where several other German auto-components producers are also planning investments.

Significant investments in Romanian AI start-ups TypingDNA and Fintech OS in the final quarter of last year placed Romania among the leading countries in Eastern Europe.

The Russian tech giant Yandex is taking on Russia’s supermarket chains by offering super-fast delivery service that promises to get groceries to your door in under 15 minutes.