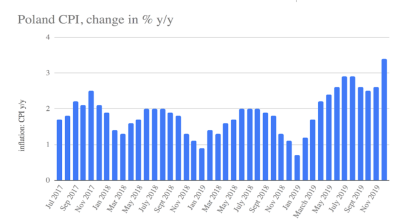 Polish CPI expanded 3.4% y/y in December, with the annual growth rate adding 0.8pp versus the preceding month, the statistical office GUS said on January 15. The reading is in line with GUS' flash estimate published in early January.

Higher prices in food, housing, hotels and restaurants, as well as culture and recreation segments drove the result, ING said in a comment on the figures. A pick-up in core inflation – prices without food and energy – also played a role.

Still, the consensus for the monetary policy is that it will remain unchanged with rates at a record low of 1.5%. “Rates should remain unchanged in 2020-2021, as the [Monetary Policy] Council prioritises GDP growth over price stability," ING said in a comment on the figures.

Broken down by key segments, prices grew 6.9% y/y in the most-weighted segment of food and non-alcoholic drinks. That is an increase of 0.4pp versus the y/y expansion in November.

Prices in the second most-weighted housing segment increased 2% y/y in December, the same growth rate as in the preceding month.

Growth of headline CPI was somewhat impeded by prices rising 1.2% y/y in the clothes and shoes segment, compared to a retreat of 1.8% y/y in November.

Core inflation increased 3.2% y/y in the twelfth month, according to ING's estimate. Poland's central bank, the NBP, will give the official core inflation figures on January 16.

In monthly terms, CPI inched up 0.8% in December after expanding 0.1% on the month in November.

“In 2020, CPI is expected to top out around 4.2%-4.4% y/y in February-March. Inflation should decelerate in the second quarter towards 3.5% y/y, the upper central bank target band and should remain close to that level for many months. We see 2020 CPI averaging at 3.6%,” ING said.

Balkans have some of the world’s strictest anti-coronavirus measures
1 day ago
Ukraine's Economics Ministry forecasts 3.9% economic contraction in 2020
2 days ago
Russia's National Welfare Fund steps up again to $157.2bn, or 11% of GDP, in March
5 days ago
Small countries in Balkans and South Caucasus most exposed to tourism industry collapse
6 days ago
Capital Economics slashes CEE growth forecasts for 2020 to -2% y/y
7 days ago