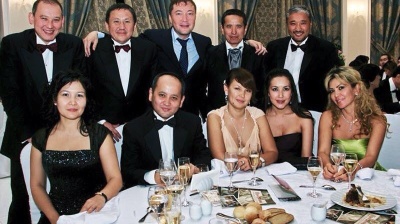 Ablyazov served as chairman of the board of directors at BTA, Kazakhstan’s biggest lender until it defaulted on $12bn of debt in 2009. BTA accuses Ablyazov of diverting much of those funds for his own gain. Investigators claim Ablyazov developed several complex schemes aimed at financing investment projects in Russia, enabling him to systematically embezzle the bank’s funds in large amounts.

The materials prepared for the court case reportedly make up over 400 volumes. The ex-banker—who represents himself as an exiled dissident campaigning for political reforms as head of the banned Democratic Choice of Kazakhstan (QDT) party and is a constant thorn in the side of the Kazakh ruling establishment, using online means to prompt street demonstrations of his supporters—stands charged with abuse of office, nine instances of serious fraud, three instances of money laundering and causing significant damages via fraudulent misrepresentation carried out by an organised group.

On January 17, the court had to adjourn the hearing due to the absence of Ablyazov’s representative. Among other defendants in the case are ex-president of BTA Roman Solodchenko along with multiple other former BTA Bank employees, currently residing in Europe. Their extradition is sought by Kazakhstan, Russia and Ukraine.

Ablyazov, a critic of Nursultan Nazarbayev who served as president of Kazakhstan for three decades before he resigned in the spring last year, has been living in self-imposed exile in Europe since 2009. He was tried in absentia in Kazakh business capital Almaty in June 2017 and sentenced to 20 years in prison on charges of organising and leading a criminal group, abuse of office, embezzlement of around $6bn, and financial mismanagement. He has protested his innocence, describing his trial as politically motivated.

In a separate case, the bank has accused Ablyazov and his partners of using real estate projects in Europe and the US—including units at the Trump Soho in New York—to launder $440mn while the authorities were probing the alleged thefts. It has also accused Ablyazov’s son-in-law Ilyas Khrapunov of concealing talks on real estate dealings in the US by using hundreds of accounts for encrypted emails while facing the money laundering charges. Ilyas’s father, Viktor Khrapunov, Ablyazov’s close associate, has also been accused of stealing $300mn from the city of Almaty.

The City of Almaty and BTA Bank sued Viktor Khrapunov in a federal court in New York in 2015. On July 26, 2018, a Kazakh court commenced preliminary hearings in a land parcels corruption case brought against Viktor Khrapunov and his wife, Leila Kharpunova. The pair, who are living in Switzerland, have been charged in absentia with fraud, creating and running an organised crime group, money laundering, abuse of office, and embezzlement. Ten individuals who worked under Viktor Khrapunov when he was mayor between 1997 and 2004 also face charges. They have been ordered not to leave Almaty.

Viktor Khrapunov became governor of East Kazakhstan region after serving as mayor of Almaty but was fired from that post in 2007. Thereafter, he served for a short while as emergency situations minister. Khrapunov and his family moved to Switzerland in 2007 after a scandal, in which land parcels were allegedly distributed illegally by Khrapunov during his time as mayor, came to light. The ex-mayor has rejected the charges against him and his wife. He claims they are politically motivated.

Kazakhstan headhunts Belarusian IT developers, in vain so far

Exit polls and partial results show Save Romania Union and its ally Plus are heading for victory in local elections in several first-tier cities, as they become a major force in Romanian politics.

The violence at the Sunday mass rallies in Belarus went up yet another notch on September 27 when masked OMON officers used stun grenades against protesters, liberally doused the crowd with pepper stray and fired multiple shots into the air.

Poland’s last two coal mines will cease operations in 2049, according to an agreement reached by the country’s powerful mining unions and the right-wing populist government.

Major fighting erupts between Armenia and Azerbaijan over Nagorno-Karabakh

Both sides accuse each other of starting clash. Russia calls for immediate ceasefire. Turkey pledges to stand by Azerbaijan.