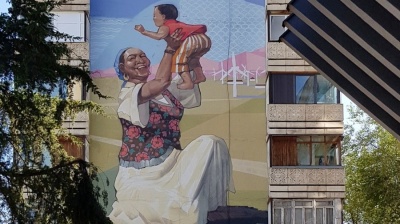 A mural in Kazakh business capital Almaty. Kazakhstan's manufacturing industry may be emerging from its pandemic nightmare.
By bne IntelIiNews June 2, 2020

Operating conditions across the Kazakh manufacturing sector were broadly stable during May, following six months of consecutive decline, according to the latest Tengri Partners Kazakhstan Manufacturing Purchasing Managers’ Index (PMI). It posted 50.1 in May, up from 39.3 in April, the PMI survey report released by IHS Markit showed on June 1. 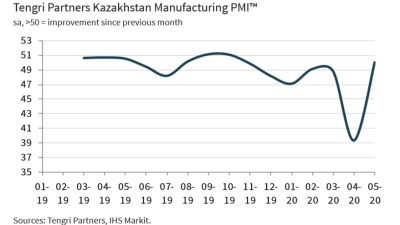 Anything above 50.0 signifies an overall expansion in the surveyed sector. The survey panellists linked the expansion in Kazakh manufacturing production to softer rates of decline seen in both factory production and order book volumes, a result of the lifting of coronavirus (COVID-19) quarantine lockdowns.

“[Factory] output declined for the seventh month running, although the rate of decline was the softest in the aforementioned sequence. Respondents linked the decline to impacts stemming from the coronavirus disease 2019 (COVID-19) pandemic, although some firms noted that easing lockdown measures had allowed them to restart production,” the index report said.

“Order book volumes also fell, as has been the case in each month since December 2019. Anecdotal evidence associated the fall with muted client demand due to the global coronavirus crisis,” it noted. “That said, the rate of reduction softened from April and was only moderate overall,” the report added.

“Meanwhile, muted demand conditions led Kazakh goods producers to pare back on purchasing during May. Buying activity fell for the sixth month running, albeit only fractionally and at the softest rate in the aforementioned sequence,” the assessment said.

As a result, pre-production inventories declined, which has been the case in Kazakhstan each month since last September. Despite easing from April’s record low, the rate of decline was “solid overall”, the report noted.

“Kazakh manufacturers recorded unchanged staffing levels during May, as signalled by the seasonally adjusted Employment Index posting at the crucial 50.0 no change mark. Meanwhile, the level of outstanding business declined further as lower production requirements allowed firms to direct resources to unfinished orders,” it said, adding that “The rate of backlog depletion was the second-softest on record and only marginal.”

The Kazakhstan Manufacturing PMI produces a headline figure derived from a survey, produced by IHS Markit for Tengri Partners—the survey has been conducted since March 2019 and is an early indicator of the economic health of the Kazakhstan manufacturing sector. The measurement is derived from indicators for new orders, output, employment, suppliers’ delivery times and stocks of purchases.

The seasonally adjusted IHS Markit Russia Services Business Activity Index registered 47.8 at the end of the second quarter, up notably from 35.9 in May, Markit said in a press release on July 3.

Global tourism sector set to lose between $1.2 trillion and $3.3 trillion depending how long travel restrictions last, the UN’s trade and development body forecast.

Foreigners bought €169.99mn of property in the tiny Adriatic country in 2019.

IHS Markit points to the challenging business environment in the manufacturing sector as demand and capacity utilisation remained weak amid the ongoing coronavirus crisis.

Net foreign direct investment leaving Ukraine in 1Q20
14 hours ago
Russia Services PMI bounces back to 47.8 in June, up from 35.9 in May
2 days ago
Croatia to be among countries worst hit by tourism collapse this year, says UNCTAD
3 days ago
Russians, Serbians, Turks the biggest property buyers in Montenegro
3 days ago
Polish PMI advances but remains below 50 points as restrictions lifted
4 days ago