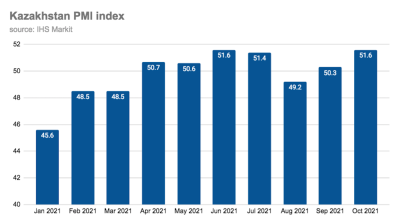 Operating conditions across the Kazakh manufacturing sector showed ongoing improvement in October, according to the latest Tengri Partners Kazakhstan Manufacturing Purchasing Managers’ Index (PMI). The index posted 51.6 in October, up from 50.3 recorded in September, the PMI survey report released by IHS Markit showed on November 1.

Anything above 50.0 signifies an overall expansion and anything below 50.0 represents a deterioration. Central to the stronger growth momentum in October were faster expansions in both output and new orders. In addition, new business grew for the seventh successive month at a solid pace that was the fastest since July. Survey respondents indicated that an improving demand environment led to a better ability in securing new contracts.

"Firms are still facing some headwinds, however. Difficulties replenishing staffing levels continued, while logistical issues in the securing of inputs sourced from abroad led to delivery delays and added to inflationary pressures. These factors could potentially limit the pace of expansion in the months ahead unless they begin to moderate soon," he added

The report also noted that “higher output requirements led firms to expand their purchasing activity for the first time in three months, albeit only marginally. Those manufacturers that purchased inputs over the month continued to experience delivery delays. In fact, lead times lengthened to the greatest extent since March. Respondents indicated that delivery delays were often linked to issues sourcing inputs from China and Russia.”

The report further observed that “input costs and output prices each rose at the sharpest rates in three months during October. Where input prices increased, panellists mentioned higher supplier charges, including for fuel, lubricants and metals. Higher costs for inputs from Russia were also reported. In turn, firms often passed on these higher cost burdens to their customers.”