Kazakh ruling party and Nazarbayev back Tokayev as election candidate 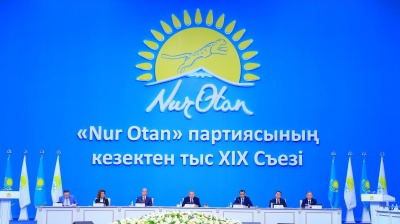 Nazarbayev chairs the extraordinary XIX congress of Nur Otan party which nominated Tokayev (seen to the left of Nazarbayev) as the party's candidate in the snap presidential election.
By Nizom Khodjayev in Nur-Sultan April 23, 2019

Kazakhstan’s Interim President Kassym-Jomart Tokayev has been nominated as the ruling Nur Otan Party’s candidate in the June 9 snap presidential election, it was announced at the party’s congress in Nur-Sultan (formerly Astana) on April 23.

His victory in the election is thus a foregone conclusion—the country in reality has no tangible opposition, with the Nur Otan (“Radiant Fatherland”) Democratic People’s Party holding absolute power. The only other parties expected to take part in the election are token opposition parties that essentially never criticised Nursultan Nazarbayev and his policies during his three decades at the helm as president. The triumph for Tokayev—who was installed as interim president when Nazarbayev, 78, suddenly resigned in mid-March—will be orchestrated and guaranteed in the same way that his predecessor’s election victories were pre-determined. Nazarbayev, who remains Kazakhstan’s “Leader of the Nation” for life, always won over 90% of the votes cast.

At the pre-election congress of the secular and 'big tent' Nur Otan party, Nazarbayev gave a clear endorsement to Tokayev, formerly the speaker of the senate and previously foreign minister and prime minister, saying: “Having known him for many years, I consider him the worthiest candidate in the country for this position today.”

“I consider it an honour and a sacred duty to continue the path of the first president,” Tokayev said at the gathering, according to Reuters, referring to Nazarbayev who is now officially known as First President and National Leader and heads the Kazakh security council as well as Nur Otan. He added: “The strategic direction defined by the national leader will be the path that we will never leave, will be our lodestar.”

His nomination could mean one of two things. Either Nazarbayev is still postponing the permanent successor question or the president’s post no longer holds the importance it once did.

The latter explanation would make sense in the light of the weakening of the presidential powers in favour of lawmakers and the cabinet that took place in March 2017. The move was widely interpreted at the time as providing a failsafe for Nazarbayev who would in that scenario still retain power over the president, if he were to step down. The scenario would mean that Nazarbayev has decentralised power at the top and has decided that the group consensus of the Kazakh elite will be sufficient to keep the country running in his future absence. As of now, Nazarbayev still retains power over the country despite stepping down.

Some Kazakhstan watchers speculate that Tokayev will only stay in power as long as Nazarbayev is alive, and that Nazarbayev’s “real successor” is unlikely to be revealed while Nazarbayev de facto is still ruling the nation from behind the scenes. In this hypothesis, Nazarbayev’s daughter Dariga Nazarbayeva, who holds the position of speaker of the senate vacated by the interim president, remains a potential future leader of the country in the event that Tokayev steps down.

Pushing populist policies
Tokayev has been engaging in a countrywide tour, pushing populist policies ahead of the election. He recently ordered the country’s central bank to find ways to ensure lower bank lending rates this year and to raise growth in lending. Tokayev’s other moves so far include raising salaries in the public sector.

Some local reports suggest billboards featuring Tokayev have been springing up around the country, while social network accounts named “Toqayev Team” (using the Kazakh spelling of his name) have emerged lately. “Toqayev Team” has posted photos of the interim president in his youth on Youtube.

Western observers such as the Organisation for Security and Co-operation in Europe (OSCE) have never recognised oil-rich Kazakhstan’s elections as free and fair.

However, RFE/RL reported on April 23 that two days ago police in commercial capital Almaty detained several young activists who protested during a marathon that involved runners from Kazakhstan and abroad. The activists held a large banner that said "You cannot run away from the truth" and featured hashtags calling for fair elections.

Two of the detained activists, Asiya Tulesova and Beibarys Tolymbekov, were reportedly subsequently found guilty of violating the country's laws that ban public protests without an official permit and sentenced to 15 days in jail each. On April 22, three other activists were fined on the same charge.

Kazakhstan has seen unusually persistent protests of late. Demonstrators in several cities have accused the government of ignoring the needs of ordinary people. The anger and grief felt over the deaths of five children from a single family in February in a house fire in the capital in part triggered the protests. The predawn fire destroyed a small family home while both parents were away working overnight shifts. Five girls aged 3 months to 13 years lost their lives.

Borealis pulls out of $6.8bn plan to build petrochemical plant in Kazakhstan

Retail sales under lockdown across Central and Eastern Europe are sinking

Borealis pulls out of $6.8bn plan to build petrochemical plant in Kazakhstan
Business rallies to help in fight against coronavirus across Eastern Europe and Central Asia
Retail sales under lockdown across Central and Eastern Europe are sinking