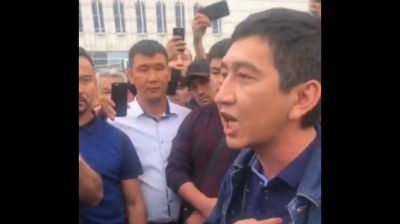 Rinat Zaitov, a poet and musician who has said he aims to form his own political movement, was released after protesters rallied at Almaty's department of internal affairs where he was detained.
By bne IntelliNews June 11, 2019

Rallies that featured hundreds, if not thousands, of protesters in largest Kazakh city Almaty and the capital Nur-Sultan on the day of the snap presidential vote (on June 9) continued on a much smaller scale early on June 10. However, a major protest took place in Almaty on the night of June 10-11 in response to Kazakh law enforcement authorities rounding up around "100 independent election observers" who had gathered at Almaty Arena, according to some opposition activists.

Kazakh authorities sent in the Kazakh Spetsnaz (local special forces units) to raid the observers’ event, activists said. Among those detained was the leader of a local volunteer election observer group, Rinat Zaitov, a poet and musician who has said he aims to form his own political movement. The incident was recorded on video.

In response to the arrests, dozens, if not hundreds of Kazakhs, staged a rally at the Almaty-based department of internal affairs, where Zaitov was taken. The law enforcement authorities, under pressure from the gathering, then let Zaitov go. An impromptu march, accompanied by drivers honking their horns, subsequently took place along Tole Bi street, as captured in video footage. The peaceful demonstrators included both people on foot and people driving multiple cars which interfered with night-time traffic.

The protesters are heard chanting “Kazakhstan!” in another posted video. In response, law enforcement authorities including riot police blocked off the road and conducted another round of arrests. Police were seen slamming people to the ground. News website Tengrinews.kz alleged police beat up one of its reporters at the site. Reuters reported the Almaty police department as saying a car driven by protesters had hit a policeman and a police car had been damaged by stones hurled at it.

Potential to mobilise
The demonstrations on election day, and follow-up events, have demonstrated the potential of the Kazakh opposition to mobilise. The 16% of the vote won by the sole genuine opposition candidate, former journalist Amirzhan Kosanov, marked the first time in a long time that any candidate apart from the ruling party’s candidate was able to garner significant support.

Anti-government activists continue to call for more protests. Messages on social media urge people to take to the streets again, or for the first time on June 11. The interior ministry said police arrested 200 people on June 10 in addition to the 500 held on election day for staging protests defined as illegal because they were not explicitly allowed by the government

The logistics of the election have been scrutinised by both local election observers and the Organisation for Security and Co-operation in Europe (OSCE) observation mission, placing in question whether shoo-in regime candidate Kassym-Jomart Tokayev would have won under different circumstances. The opposition's goal of putting pressure on the ruling Nur Otan (Radiant Fatherland) party, led by president of three decades until his resignation earlier this year Nursultan Nazarbayev, has been accomplished.

But the battle seems far from over, something that would have been all too apparent to the opposition-aligned election observers who gathered at Almaty Arena. The observers, numbering at around 150 activists, aimed to collectively “[publicly] present their protocols” as proof that Tokayev did not fairly win the election, at least according to what was observed at polling stations monitored by independent observers across the country, opposition activist in-exile Ermek Narymbai said in a YouTube video.

It is unclear whether the protests will continue, or perhaps even escalate—compared to the country-wide land reform protests of 2016, for example, the rallies so far might not appear to present as much of a threat to the ruling regime.

A campaign calling for real change has, however, gained some momentum on social media, using the hashtags #qazaqkoktemi (Kazakh spring) and #menoyandim (I’ve woken up). A new movement called Wake Up, Qazaqstan has emerged from it, calling for democratic reforms.

Sentiments of the population
What remains to be seen is how Nazarbayev, who still maintains power over the country from the shadows, and his ruling clan will respond to the sentiments of the population, among which economic discontent has been brewing for the past three years. Some Kazakh analysts, however, see the mass protests against the claimed unfair elections as an indicator of a society that is transforming.

“In essence, society has become different. It is liberated. Power as a phenomenon is desacralized,” Kazakh political analyst Aidos Sarym told Radio Azattyk in an interview on June 10.  “Ak Orda, [an all-encompassing term for the ruling elite, and the name of the presidential palace], due to a certain ‘magical’ phenomenon, turned into a [perceived] figure of management. New generations of citizens who did not participate in laying the unwritten public contracts that were made in the 1990s [after independence was gained from the former Soviet Union] are entering the political arena. They are not satisfied with these contracts, they are not satisfied with the content. We are now convinced that the party-political system, which was created in the late 1990s to early 2000s, has become completely obsolete.”

“Significant reforms are needed. First of all, we need to change the laws on parties, on elections, on the media, on rallies—so that a normal political culture and a new political reality are created in the country, so that the voice of society can be heard on all levels of government,” Sarym added.

Tokayev's victory is widely believed by Kazakhs to be paving the way as a temporary presidency that will eventually end in Nazarbayev's daughter, Dariga Nazarbayeva, taking power. Dariga took over Tokayev's previous position of Senate speaker after Nazarbayev stepped down in March.

To some observers, the (non-)transition of power to Tokayev signifies that the president’s post no longer holds the importance it once did. This would make sense in the light of the weakening of the presidential powers in favour of lawmakers and the cabinet in March 2017. That was widely interpreted at the time as a failsafe for Nazarbayev who would in that scenario still retain power over the president, if he were to step down. This would mean that Nazarbayev has decentralised power at the top and decided that the group consensus of the Kazakh elite will be sufficient to keep the country running in the event of his absence.

The company has financed its sharp expansion over the last few years by aggressive borrowing. It is now eyeing the mobile telecommunication operations of Deutsche Telekom in Romania.