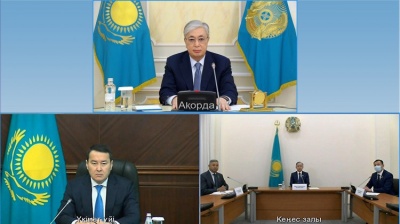 Kazakhstan’s President Kassym-Jomart Tokayev, who showed vulnerability last week when he resorted to inviting in Russian troops to help stamp out a growing uprising, on January 11 attempted to change the narrative with a populist turn in which he hit out at how “oligarchic groups” took root in the country under his predecessor Nursultan Nazarbayev and announced he was setting up a For the People of Kazakhstan national fund that would require contributions from the wealthy and profitable companies.

In a video call with parliament, Tokayev, who became president in 2019, said that under the 29-year-long Nazarbayev presidency, "a group of very profitable companies emerged in the country as well as a group of people wealthy even by international standards".

"I think it is time they pay their dues to the people of Kazakhstan and help them on a systemic and regular basis," he added.

Kazakhstan’s financial system, said Tokayev, was dominated by large business groups "based on the principle 'everything for friends, and laws for everyone else'".

Tokayev also hit out at security officials, saying that as the unrest grew they abandoned their posts and let protesters capture weapons and classified documents.

Since the unrest was brought under control, Tokayev, backed in his assessment by Russian counterpart Vladimir Putin, has, without any compelling evidence, doubled down on the claim that the violence on the streets and “attempted coup” were very much the work of foreign-trained plotters and “terrorists”. However, in his televised address to lawmakers, the 68-year-old president conceded that the public discontent over income inequality was justified and he wanted associates of Nazarbayev to share their wealth.

Tokayev—who announced that his new government would be led by career public servant Alikhan Smailov and that Russian troops would begin withdrawing from Kazakhstan in two days—also said: "The time has come to give people what belongs to them, to provide help systemically. The government must look into such companies to define what their contributions to the For Kazakhstan's People Fund should be."

The nation's oligarchs had caused “seriously restricted development of the free market and dented the country’s competitive edge”, Tokayev, a former diplomat and technocrat known for not having become much involved in business during his career, added.

The new prime minister has been ordered by Tokayev to secure “additional revenue” from oil and mineral-rich Kazakhstan's mining companies and present a government programme for the year within three weeks, Tokayev said. Gasoline producers, he also stated, must pay higher excise duties without introducing price hikes to consumers.

Tokayev also poured scorn on the state-owned Development Bank of Kazakhstan. He told MPs that it “has essentially turned into a personal bank to serve a circle of persons” representing financial, industrial and construction groups. “We know everyone by name,” he said.

Handing out further orders, he told prosecutors and the finance ministry to overhaul the “real mess” in customs services. The state, he complained, was losing tens of billions of tenge in unpaid duties. Some operators, he said, were seen as “untouchable.”

As analysts looked for Tokayev moves that would directly target people around Nazarbayev, the government received orders from the president to shut down operations of Operator ROP, a major disposal and recycling company that many in Kazakhstan say is connected to Nazarbayev's youngest daughter, Alia Nazarbayeva.

Nazarbayev, 81, has not said a word in public since the Kazakhstan crisis begun, though his spokesman has claimed he remains in the capital, Nur-Sultan, and wants the country to unite around the Tokayev administration.

“Tokayev’s speech doesn’t change the overall reform direction,” Tom Adshead, director of research at Moscow-based consultancy Macro Advisory, was quoted as saying by Bloomberg, adding: “What he’s looking for is some demonstrative populist measures against elites who made money under Nazarbayev.”

The presidential decree appointing a new government detailed how the interior minister, defence minister and foreign minister have retained their posts, unlike the ministers of information, justice, health, industry, economy, culture, finance and energy who have been replaced.

The Interior Ministry said on January 11 that security forces have so far detained 9,900 people in connection with the unrest.

Croatian president clashes with government over Russia-Ukraine standoff
1 hour ago
Explosion at Albanian Football Federation head’s home after voting scandal
9 hours ago
Slovak parliament likely to approve defence agreement with the US
17 hours ago
Westinghouse corrals Polish companies to work on nuclear power plant
17 hours ago
Western allies sending Ukraine arms, but not Germany
17 hours ago