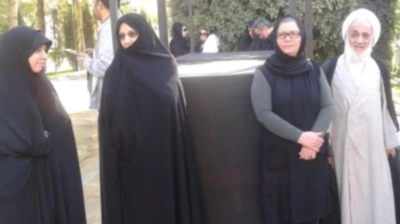 A sister of Iran’s supreme leader, Ali Khamenei, has spoken out against her brother’s “despotic caliphate” that has brought nothing but suffering, according to a letter published by her exiled son.

In her letter, Badri Hosseini Khamenei, who lives in Iran, also condemned the Islamic Republic’s bloody crackdown on the nationwide anti-regime demonstrations that have taken place in the country since mid-September.

Badri Hosseini Khamenei called on Iran’s hardline Islamic Revolutionary Guard Corps (IRGC) and “mercenaries” to lay down their weapons as soon as possible and “join the people”. She added that it was only poor health that was preventing her from joining the rallies.

“I think it is appropriate now to declare that I oppose my brother’s actions and I express my sympathy with all mothers mourning the crimes of the Islamic Republic,” she wrote in the note shared on the Twitter account of her son, Mahmoud Moradkhani.

Human rights group estimate towards 500 people have lost their lives amid the unrest in Iran sparked by the death in the custody of the Tehran morality police of Mahsa Amini, 22, who was detained for allegedly wearing her hijab, or headscarf, loosely and other alleged offences against Iran’s Islamic dress code.

“The crimes of this system, the suppression of any dissenting voice, the imprisonment of the most educated and the most caring youth of this land, the most severe punishments, and the large-scale executions began from the very beginning [of the Islamic Revolution in 1979],” Khamenei said in her letter.

Badri Hosseini Khamenei comes from a side of the family that has always had a tense relationship with the regime. Her husband, Ali Tehrani, lived for years in exile in Iraq. From there, he frequently criticised the Islamic Republic in radio broadcasts. On his return to Iran in 1995, he spent 10 years in jail. He died in October this year.

In her letter, Badri Hosseini Khamenei also suggested that she had decided to go public with her thoughts after her daughter, Farideh Moradkhani, who like her mother lives in Tehran, was detained last month. Moradkhani is a long-time critic of the regime.

“Losing a child and being away from your child is a great sadness for every mother,” Khamenei wrote of her daughter. “Many mothers were bereaved during the last four decades. I think it is appropriate now to declare that I oppose my brother’s actions and I express my sympathy with all mothers mourning the crimes of the Islamic Republic regime, from the time of [the former supreme leader Ruhollah] Khomeini to the current era of the despotic caliphate of Ali Khamenei.

“My concern has always been and will always be the people, especially the women of Iran. I believe that the regime of the Islamic Republic of Khomeini and Ali Khamenei has brought nothing but suffering and oppression to Iran and Iranians.”

Levelling another accusation at her brother, Khamenei accused him of not listening to his people. Instead, she wrote, he took counsel from “his mercenaries and money-grubbers”.

Tehran continues to represent the protest movement as fomented by foes including the US, Saudi Arabia and Israel. It has accused “terrorists” of killing dozens of security force members amid the unrest.

On December 6, authorities condemned five people to the death penalty for allegedly killing a member of the Basij paramilitary force affiliated with the Revolutionary Guards.

On December 7, comments from some officials that indicated Iran might be about to disband its morality police continued to be met with scepticism.

In expressing his backing for the protesters, Khatami, a 79-year-old reformist who served as Iran’s president from 1997 to 2005 but has been sidelined by the present ruling officials, described as “beautiful” the protest movement’s main slogan – “Woman, life, freedom”. The chant was “a beautiful message that shows movement towards a better future”, said Khatami.

“Freedom must not be trampled on in order to maintain security” and “security should not be ignored in the name of freedom”, he added.

In another development on December 7, students at Tehran University said they were beaten back by security forces as they tried to hold a protest as President Ebrahim Raisi arrived to deliver a speech.

In his address, Raisi once again denounced the US.

“The Americans are after destruction and want a destroyed Iran instead of a strong Iran,” he said. “They want here to become Syria and Afghanistan, but they have made a mistake in their calculations and the educated Iranian men and women won’t allow them.”

Raisi also remarked: “You talk about the issue of dictatorship. Who’s the dictator? The one who imposes so many sanctions against this country.” The US has hit Iran with harsh sanctions since 2018 after unilaterally withdrawing from the 2015 multilateral nuclear deal, or JCPOA, between Iran and world powers under which sanctions were dropped in return for Tehran guaranteeing that it would keep the country’s nuclear programme entirely civilian.

Raisi’s visit to the university came on the third and final day of a three-day general strike that was called anonymously online. The three days saw many videos published online of closed shops in cities across the country. Officials countered with many videos released via state media outlets showing shops were open.

On December 5, the chief analyst for Israeli military intelligence was reported as saying Iran's clerical rulers were likely to survive protests sweeping the country and could stay in power for years. That prompted his commander to predict that the enemy regime would eventually fall.

Avril Haines, head of US intelligence, said on December 3 that the Iranian authorities did not see the protests as "an imminent threat to their stability". But she added that the government's deadly response to the protests, in combination with other factors such as the bleak economic situation in Iran, would "lead to a greater risk of unrest and instability over time."