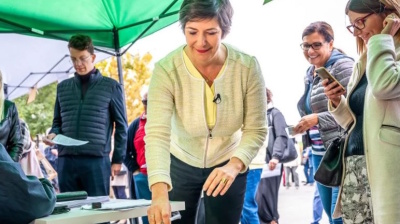 Klara Dobrev (Democratic Coalition, DK), Budapest Mayor Gergely Karacsony (Dialogue-Socialists) and Peter Marki-Zay, Mayor of Hodmezovasarhely, are set to go into a run-off to be the opposition candidate to face Hungarian Prime Minister Viktor Orban in next year's general election.

According to preliminary figures, Dobrev is leading the first round of voting with 102,000 votes, 15,000 votes ahead of Karacsony. Marki-Zay, fielded by a civic union, is in third place with 65,000 votes. Peter Jakab, head of the rightwing Jobbik party,  and the president of the liberal Momentum party Andras Fekete-Győr (MM) did not make it to the second round, which kicks off next week.

Voters cast their ballots at Hungary’s first-ever primaries held by opposition parties until Tuesday night to select candidates at 106 districts and their choice for prime minister.

Technical problems and a lack of resources are hampering the count, but opposition parties are talking about a victory of democracy.  More than 680,000 voted online and offline, which is roughly 8% of all eligible voters.

After years of bickering and two unsuccessful elections, Hungary’s opposition stands a real chance of beating Hungary’s strongman, who has cemented his power by dismantling checks and balances and by rewriting election laws.

The win by Dobrev is not much of a surprise as the Democratic Coalition remains the most popular party of the opposition with a strong and dedicated base. The party’s support stands at 16-18%, a few percentage points ahead of Jobbik. These two parties owe their success partly to their radical criticism of the Orban regime.

The real surprise in the first round is the widespread support for conservative Mayor of Hodmezovasarhely, Peter Marki-Zay, who was catapulted to national politics in February 2018, when he unseated Fidesz' former cabinet chief Janos Lazar in a by-election in his hometown. Marki-Zay, a father of seven and an engineer, has worked in executive positions in the energy sector abroad before moving to Hungary.

The runoff with the top three finishers is still an open race as it could easily lead to anti-Dobrev coalition, some commentators pointed out. Marki-Zay and others claim that Dobrev would be the jackpot for Fidesz, which would relish confronting the wife of former Socialist Prime Minister Ferenc Gyurcsany.

Gyurcsany remains one of the most unpopular Hungarian politicians. He is blamed for mismanaging the economy after taking office in 2004 after a change at the helm of the then ruling Socialist party and for the tough crackdown on protesters in the autumn of 2006.