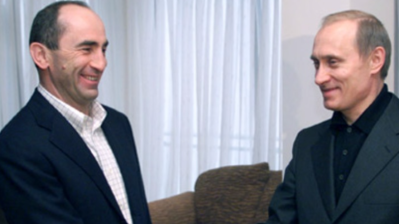 Robert Kocharyan pictured with Vladimir Putin in March 2002 when Kocharyan was serving as Armenia's president. Putin over the years has been known to place birthday greeting calls to Kocharyan.
By Neil Hauer in Yerevan June 18, 2021

Armenia’s main opposition contender in the June 20 general election, Robert Kocharyan, has taken a page from the Kremlin playbook by proposing a law on ‘foreign agents’ for foreign NGOs.

The move comes as part of Kocharyan’s attempt to paint himself as a nationalist, pro-Russian strongman, as opposed to the alleged pro-Western sympathies of main rival Nikol Pashinian.

During a campaign stop, Armenia’s second president, Kocharyan, said that he plans to "set strict controls" on the work of organisations funded by foreign donors.

"They will either be banned or will operate as foreign agents under strict control," Kocharyan said on June 13 during a campaign stop in Armenia’s Tavush province. The proposal appears to echo Russia’s recent ‘foreign agent’ law, which has led to the censure and closure of civil society and media organisations, including the independent Latvia-based Russian-language media outlet Meduza.

This was far from the first time that Kocharyan—who has been known to receive birthday greeting calls from Russian leader Vladimir Putin—has railed against the “destructive” role of foreign-funded organisations in Armenia, and Kocharyan is only one among many voices on the Armenian right to insist that George Soros is somehow aiming to “destroy” Armenia.

The discussions over the role of ‘Soros men’ — that is, people who allegedly receive marching orders from Hungarian-American financier and philanthropist George Soros — became prominent during and after Armenia’s 2018 Velvet Revolution that put Pashinian in power.

The conspiracy theory has its origins in Hungarian Prime Minister Victor Orban’s campaign against Soros and Soros-founded organisations such as the Open Society and the Central European University, but has gained traction with far-right groups all around the world. According to its Armenian proponents, organisations with ties to Soros are seeking to use issues like women’s rights and queer rights to undermine Armenia’s "national values" and weaken the country.

The attacks on any Western-funded organisations and media outlets — usually identified with Soros, regardless of where they received their funding — became even more vicious after Armenia’s defeat in last year's Second Nagorno-Karabakh War.

In the riots that broke out in Yerevan the night that the tripartite peace declaration was announced, rioters attacked foreign-funded offices and journalists — including the local offices of the Open Society Foundation and the offices of RFE/RL.

Urge to blame outside forces

According to Gegham Vardanyan, editor-in-chief of the Media Initiatives Center, the urge to blame outside forces after the war defeat is to be expected.

"It’s easy and comfortable to find people who are to blame for everything," he told OC Media. "People like Soros or Bill Gates are always there. And this is not a case for Armenia only."

He added that Kocharyan’s invocation of the spectre of Soros might be an attempt to play to particular parts of his base. "In the case of Mr Kocharyan," he said, there are also many apparent far-right groups and extremists among his supporters and such statements might be addressed to them.

Vardanyan said he fears that a foreign-agents law, if passed, will eviscerate some of the best journalistic outlets in the country. "Almost all media outlets that are maintaining a balance — providing people with information beyond the propaganda of certain political forces [...] are Western-funded in one way or another."

Daniel Ioannisyan, project coordinator of the Union of Informed Citizens NGO, often smeared as a "foreign-funded NGO" by the Armenian right, told OC Media that the proposal is nothing less than an attack on Armenia’s democratic institutions.

"Civil society organisations are a class enemy for [Kocharyan and his allies], and civil society is one of Armenia’s most established institutions," Ioannisyan told OC Media, adding that it’s not surprising that the former authorities are pushing this agenda, because when they were in power they also "acted against the democratic institutions of Armenia".

Separately, two of Armenia’s leading telecoms providers have denied forcing their workers to participate in political rallies ahead of the country's June 20 general election.

Both Vivacell-MTS and Ucom have faced rumours that their employees were pressured to attend rallies in support of either Pashinian or Kocharyan. Other companies have been found to have forced employees to attend Kocharyan’s rallies.

A Ucom statement, issued on June 14, said that “[t]he information in the press, without a source, that the employees of Ucom are allegedly forced to choose this or that political force, is a fabrication and does not correspond to reality. From the very first day of the company's existence, Ucom employees work in a work environment where any discrimination related to religion, political views or membership in non-governmental organizations is excluded. The only condition for an employee to be accepted into the company is professionalism and to be loyal to the values ​​of the company.”

Vivacell, in a June 17 statement, said that “[t]hroughout its more than 15 years of operation, Viva-MTS, despite such rumors and baseless accusations, has already proved that it has never been involved in political processes or campaigns. The company has performed and continues to perform a strategically important function, providing a wide range of telecommunications and digital services; it is a completely apolitical structure".