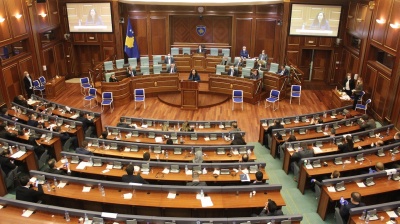 MPs keep their distance from one another as the debate the no-confidence motion against Albin Kurti's government.
By bne IntelliNews March 26, 2020

The vote plunges the country back into political instability less than two months after the coalition government between Kurti’s Vetevendosje and the Democratic League of Kosovo (LDK) took office, and as the authorities are bracing for more cases of coronavirus (COVID-19).

The LDK initiated the no-confidence vote after a series of disagreements between the two ruling parties, and 82 of Kosovo’s 120 MPs voted to dismiss Kurti’s cabinet. The vote took place late in the evening after 12 hours of debate.

The ruling parties had previously clashed over two key issues: the 100% tariffs on imports from Serbia and Bosnia & Herzegovina (that have since been lifted) and the handling of the coronavirus epidemic. The LDK was pushing for an immediate lifting of sanctions amid fears that Kosovo’s relationship with the US would be damaged should they remain in place.

The trigger was Kurti’s sacking of Agim Veliu, a member of the LDK, as interior minister after Veliu supported calls from President Hashim Thaci for a state of emergency to be declared.

At the debate in parliament on March 25, both sides accused the other of putting politics before the national interest.

"At a time when the country is most in need of internal unity and full institutional commitment in the fight against the coronavirus pandemic, Prime Minister Kurti decided to end the co-government agreement with the Democratic League of Kosovo," said the chairman of the LDK parliamentary group, Arben Gashi, reading the motion against the government that his party had formed.

Gashi added that by voting on the motion, the parliament would be “given the opportunity to form a government that would bring stability for a certain length of time”.

For its part, Vetevendosje blamed the LDK for the crisis. “The LDK, along with old allies who look like new allies, are seeking a no-confidence motion at the most difficult time for Kosovo so far. So they demand the overthrow of the government, when the world is again facing this pandemic as an already global problem,” Vetevendosje MP Rexhep Selimi said.

The pressure will now be on the parties represented in the parliament to form a new ruling coalition quickly so that all efforts can be directed towards fighting the spread of the coronavirus. A snap election is not an option at the moment as campaigning and voting would inevitably lead to an increase in contact that would risk spreading the virus.

However, previous experience has shown that it can take many months to form a new coalition; it took Vetevendosje and the LDK around four months to strike a deal following the October 2019 general election.

The vote took place despite appeals by Kosovo’s international partners, with the ambassadors of France, Germany, Italy, the UK and the US (the Quint countries) in Kosovo urging the authorities and politicians to ensure the integrity of the government and to prioritise the fight against the coronavirus over politics.

Kosovan citizens also expressed their unhappiness with the politicking at a time of national crisis. People from several cities joined a symbolic protest from their homes on the evening of March 19. Rather than putting lives at risk by gathering in person to protest, citizens went to their balconies and banged pots and pans.

As of March 26, Kosovo had reported 71 coronavirus cases and one death.