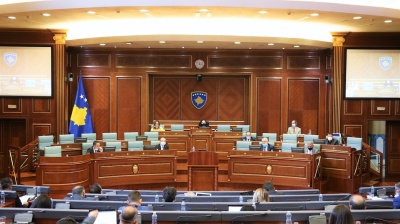 MPs of the opposition parties Vetevendosje and the Democratic Party of Kosovo (PDK) refused to participate in the vote on September 17.
By Iulian Ernst in Bucharest September 18, 2020

The draft Law on Economic Recovery was not passed during the September 17 session of the Kosovan assembly, because the MPs of the opposition parties Vetevendosje and the Democratic Party of Kosovo (PDK) refused to participate in the vote.

The government drafted the Law on Economic Recovery on July 22. It is designed to remain in force until the end of 2021. The draft law contains various forms of aid and facilities for businesses to maintain production capacity and maintain the number of employees. Representatives of the business community warned failure to extend support to businesses could drive many into bankruptcy.

This is the second failed attempt to vote on the law after Vetevendosje and PDK previously refused to vote on it in August.

No MPs from Vetevendosje or DPK gave a statement to the media on their reasons for blocking adoption of the law.

The president of Kosovo Chamber of Commerce, Berat Rukiqi, stressed in a joint conference with the American Chamber of Commerce (AmCham) in Kosovo that if there is no intervention in September and October, economic collapse is inevitable, which he claimed, will cost jobs and drive businesses into bankruptcy.

From the beginning of the pandemic until now, businesses in the country accumulated €1bn of lost revenues, Rukiqi said.

The executive director of AmCham Kosovo, Arian Zeka said that the failure to pass the law is “regrettable”. He said that this law is very important for the country, given the difficult economic situation caused by COVID-19.

"It is absolutely unfortunate that the deputies have been on vacation for over a month and in the first session after returning they do not approve a law, which is important for the private sector and for the revival of the economy in the country after the negative effects of the pandemic," said Zeka.

Technically, the draft law supplements and amends some laws, in order to help the economy recover after the negative effects caused by the COVID-19 pandemic.

North Macedonia, Albania and Serbia to invite Kosovo to join mini-Schengen on October 30

North Macedonia, Albania and Serbia to invite Kosovo to join mini-Schengen on October 30
COMMENT: Why the Balkan region should be on investors’ radar screens
US signs MoUs on 5G cyber security protection with three SEE states