Kosovan police clash with Serbs in Mitrovica in anti-smuggling operation 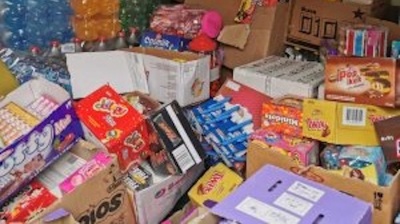 Some of the goods seized by Kosovan police and customs officials in raids across the country.
By Valentina Dimitrievska in Skopje October 13, 2021

At least seven people were injured, including six police officers in northern Kosovo as police clashed with a crowd of ethnic Serbs on October 13 during the anti-smuggling operation, the police said.

The incident adds to already heightened tensions following last month's dispute between Belgrade and Pristina over Kosovo’s decision to impose reciprocity measures by asking Serbian cars to replace their license plates with temporary ones to enter Kosovo. Angered by the move, ethnic Serbs then blocked the road to the border. A temporary deal was reached on September 30, but last week Kosovo imposed anti-dumping measures for some products imported from Serbia, a move that angered Serbia again.

The police said that the anti-smuggling operation was carried out in the regions of Pristina, Peja and Mitrovica South and North. During the operation, the police seized smuggled goods worth hundreds of thousands of euros from various locations, such as business premises and warehouses.

While in all other regions the operation went smoothly, in North Mitrovica, according to the police, organised criminal groups created roadblocks with vehicles, used gas cylinders, shock bombs, firearms and hand grenades to obstruct the work of customs and police officers.

During the shootout, six police officers were injured. One of the attackers was also injured, the police said.

According to the director of the Serbian office for Kosovo Petar Petkovic, dozens of Serbs were injured during the raids by the special Kosovan police into northern Kosovo.

The police said that the raid was over and the situation is now calm.

Kosovo's Prime Minister Albin Kurti said that the police action has been preceded by intensive investigations and were coordinated with the prosecutor’s office and courts.

“The police action is over. I call on the citizens in the North Mitrovica not to fall prey to the media in Serbia that defend crime, corruption and smuggling and want to politicise it,” Kurti said in a tweet.

On the Serbian side, Prime Minister Ana Brnabic invited Nato and its KFOR mission in Kosovo to react to the police action.

“The situation is more than dramatic and this is the last moment in which a clear reaction is needed to stop the crazy policy pursued by Pristina,” Brnabic said in the statement.

"This kind of behaviour has gone beyond any limits and leads us to the brink of chaos," she added.

KFOR troops are already deployed on the northern border with Serbia to oversee the implementation of the deal between Kosovo and Serbia over the car number plates crisis.

The latest police operation took place four days before the local elections in Kosovo due to take place on October 17.

Defence agreement between Slovakia and the US divides politics and society

The DCA would allow the US airforce to use two Slovak military airports and potentially other facilities without a request of rental payment for a period of 10 years.

Unmanned aerial vehicles will be dual-use, with some civilian purposes. Flying drones has been banned in country since 2015.

Newly appointed prime ministers of both countries agree to a fresh approach as Skopje seeks to unblock its EU accession process.

Former president denies in video address that there is conflict among the country’s elite.