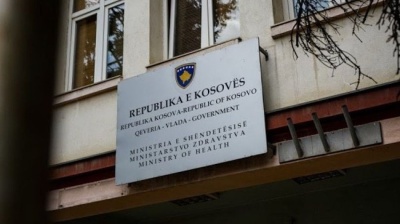 By Valentina Dimitrievska in Skopje January 24, 2022

Kosovo’s health ministry said on January 24 that the government's new measure to allow entry to the country only for citizens with a booster jab is justified due to the worsening epidemiological situation.

The ministry issued the statement after complaints from citizens of neighbouring Albania and North Macedonia about the new strict rules which, they said, hindered freedom of movement.

On January 21, Kosovo's government decided to tighten COVID-19 measures due to the jump in new infections in recent days. The measures include restriction of movement from 10 pm until 5 am, a requirement that cafes and restaurants close at 9 pm, as well as toughening of rules for entry in Kosovo. For entry to Kosovo, travellers need to prove that they have received two doses of COVID-19 vaccines plus a booster dose, or if they did not receive a booster dose then they need a negative PCR test not older than 48 hours.

The new measures took effect on January 22 and will be valid until February 4.

“All measures were the result of regular analysis of the epidemiological situation with COVID-19 in the country and consultations with health professionals,” the ministry said.

The Ministry of Health recalled that since the middle of last week, Kosovo has seen a rapid increase in COVID-19 infections, going up to over 3,000 new cases per day, which has also caused an increase in the number of hospitalised patients.

However, the ministry added that by the end of the week, authorities may review the decision after monitoring the epidemiological situation related to COVID-19 on a daily basis.

A large number of citizens from neighbouring Albania were not allowed to enter Kosovo at the Morina border crossing due to the new rules on January 22.

"I got the second vaccine recently and cannot get the booster jab now, at least until March. This requires a PCR test, but it cost €30," an Albanian citizen, who was sent back from Kosovo, was cited by Albanian Daily News on January 22.

A van driver transporting passengers said that he was not aware of the new rules set by the government in Pristina.

Citizens from North Macedonia, who also frequently travel to Kosovo, are also affected by the measure.

North Macedonia’s Deputy Prime Minister Artan Grubi told Pristina-based news portal Indexonline that he was surprised by the decision of Kosovo’s authorities as the situation with COVID-19 is the same in both countries.

"I hope that the government of Kosovo will review the decision this week and will return the previous measures," Grubi was cited as saying on January 23.

The All-Albanian Economic Forum said in a Facebook post on January 24 that the new entry rules for Kosovo significantly complicate freedom of movement, because a great number of citizens cannot take the third dose as not enough time has passed since the second dose, while PCR tests represent an additional financial cost to citizens, especially those who are frequent visitors to Kosovo.

"Expressing our understanding of the epidemiological situation, we call on the government of Kosovo to reconsider the decision without hindering the free movement of citizens in our region and without further damaging the gastronomy sector," the All-Albanian Economic Forum said.

So far, 44.5% of Kosovo's population has been fully vaccinated.

No progress in talks between Bulgaria, North Macedonia on lifting veto on EU accession talks

EU’s credibility on the line over enlargement
No progress in talks between Bulgaria, North Macedonia on lifting veto on EU accession talks
CEE companies weather the COVID-19 crisis

The announcement is the first open admission by the government about the dismal state of public finances.

Golob’s Freedom Movement agreed to form a government with the Social Democrats and the Left after winning the April 25 general election.