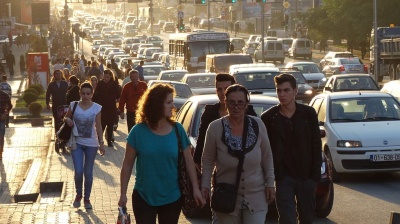 The population in Kosovo in 2021 is estimated to be over 1.77mn people with a natural increase of 14,391, as there were more births than deaths, the statistics office said on June 28.

It is estimated that during 2021, 7,353 people changed their place of residence (municipality). The number of immigrants, including returnees to Kosovo was 4,122, while 42,728 people emigrated last year.

The migration in 2021 was also due to a large number of migrants who returned in 2020 due to the COVID-19 pandemic especially from Croatia, Slovenia, Montenegro, Turkey and EU countries, who later emigrated again in 2021.

Taking into account the natural increase and negative net migration, the number of population in Kosovo decreased by 24,215 inhabitants in 2021.

BALKAN BLOG: Southeast Europe’s ties to Russia prove hard to sever
Kosovo’s PM Kurti says risk of new conflict with Serbia is high
Leaders of Serbia and Kosovo to meet as they pull back from brink of conflict