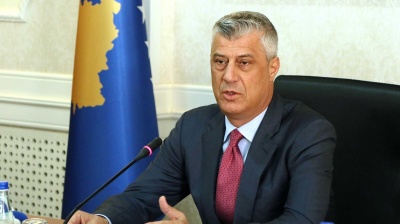 By Valentina Dimitrievska in Skopje June 24, 2020

The Hague-based Kosovo Specialist Prosecutor’s Office has filed charges against Kosovo’s President Hashim Thaci and nine others over war crimes committed during the independence war with Serbia in 1998-1999, it announced on June 24.

After the announcement, Thaci’s office said that the president cancelled his trip to the US where he was to meet Serbian President Aleksandar Vucic on June 27 to discuss the resumption of the normalisation dialogue between the two countries. The meeting was organised by the US special envoy Richard Grenell.

Kadri Veseli, a leader of the opposition Democratic Party of Kosovo, to whose ranks Thaci belongs, is also among those indicted for crimes against humanity and war crimes, including murder, disappearance of persons, torture and persecution, according to the indictment.

The indictment said Thaci, Veseli and others are suspected of being responsible for nearly 100 murders of Kosovo Albanians, Serbs and Roma including their political opponents.

A Kosovo Specialist Chambers (KSC) pre-trial judge is currently reviewing the indictment to decide on whether to confirm the charges.

”The indictment is only an accusation and is a result of a lengthy investigation,” the Specialist Prosecutor’s Office said in the statement.

The Specialist Prosecutor also said that the indictment was filed in April, but is has been revealed now because Thaci and Veseli tried to undermine the work of the KSC and carried out a secret campaign to overturn the law creating the court in an attempt to avoid trials.

Kosovo unilaterally declared independence from Serbia in 2008, but it is still not recognised by Belgrade as a separate country. The proclamation of independence came following the Kosovo war in 1998-1999 which ended with Nato attacks in Serbia. The independence war claimed more than 10,000 victims.

Thaci was elected president on February 26, 2016 for a five year mandate and officially took up the position on April 7 the same year. He was a leader of the Democratic Party from 1999 to 2016 when he became president. During his career he served as foreign minister, first deputy prime minister and he was the country’s first prime minister from January 2008 until December 2014.

When he was a leader of KLA, there were media reports that the KLA was financing its activities by trafficking illegal drugs into western Europe. Allegations of organ-trafficking are also connected with the KLA.

The KSC and Specialist Prosecutor’s Office were set up in 2015 in The Hague, but are working under Kosovo's jurisdiction.

Since 2018, the Specialist Prosecution has invited over 100 former KLA members, including top officials. Ex-prime minister Ramush Haradinaj resigned in July 2019 to appear at the court for questioning.

In April, Thaci said that he will quit politics after his mandate ends in April next year.