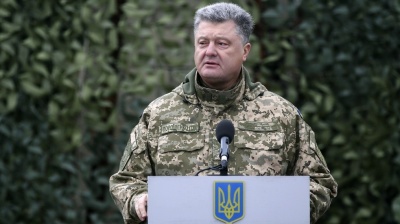 Martial law has had little impact on Ukrainians' daily lives but was necessary after an open attack by Russia
By Kateryna Kruk in Kyiv December 4, 2018

Over the last five years Ukraine has gone through many tough episodes: revolution, the annexation of Crimea, the conflict in Eastern Ukraine that was followed by the Russian invasion and has led to more than ten thousand people killed with millions more displaced, troubles with the Ukrainian economy and struggles to stabilise it. Last week’s events on the Sea of Azov can definitely be added to that list. On November 25 the Russian coast guard attacked three Ukrainian vessels attempting to sail through the Kerch Strait. The Russian ships shot at and seized the Ukrainian ships and arrested their crew. The events were followed by the introduction of martial law in 10 regions of Ukraine a few days later.

We are now a week into martial law and the first emotional shock has worn off. At least, among the people. Ukrainian President Petro Poroshenko’s political opponents continue to criticise him for introducing martial law, however needed, and making such a dramatic move right before the beginning of the election campaigns.

Ironically, these very opponents helped Poroshenko to save face when opposing his initial version of the martial law in the parliament. The draft document suggested introducing martial law over the entire territory of Ukraine for 60 days, which would have shortened the presidential campaign by one month. Whether it was due to complaints in parliament, pressure from Ukraine’s Western partners or advisers from his own team, Poroshenko showed a willingness to cooperate and ultimately limited the scope of his bill on martial law. If this hadn’t happened, then criticism of him would have been be much harsher. As for now, he can really claim to be both a patriot taking care of the country's defence and a leader ready to compromise.

And this is how many Ukrainians see him, which will also potentially improve his ratings in the presidential race a bit. It is really hard to say that he planned that incident in the Sea of Azov and overreacted with the martial law. (The Russians claim the incident was a deliberate provocation designed to improve Poroshenko’s poor ratings in the pre-election polls.)

With war already on our soil and Russians attacking us in the international waters, it would be much more dangerous not to react decisively. And, I may be too much of a realist political scientist here, but I see no crime if Poroshenko tries to use the situation to boost his rating. Let’s be honest about it, this is how politics work and this is what most politicians would do in his place. Poroshenko is using the given opportunity and the main thing is that in this case, it doesn’t contradict the interests of the state.

Yet, he is being criticised exactly for this. Mostly by his political opponents and fans of the conspiracy theories on social media. This is also a sign of a certain “Kyiv bubble” of politicians/experts/journalists who focus solely on Poroshenko, accusing him of jeopardising the upcoming elections. However, this time the situation is more than clear: Ukraine HAD to react harshly to Russia after it attacked the country openly for the first time ever and has even admitted to this attack. In this case, there can only be underreaction, no overreaction. Yes, the situation looks favourable for Poroshenko, but there are no signs suggesting that there will be no elections or that he will try to postpone them somehow.

However important the next elections are, I would risk suggesting that that is not the most worrying aspect for Ukrainians. The most discussions I saw and heard last week were about the economy, the exchange rate, and possible mobilisation. Mutual accusations from politicians are nothing new for Ukrainians but martial law is. Especially since it was introduced in a limited scope. There’s simply a lack of understanding as to what to expect next and this is what bothers people most.

The first week showed martial law brings little change in the daily routine and people quickly calmed down. The dynamics of the exchange rate in the last week is a good indicator of the public reaction: it went up in the first days after the martial law was introduced, but a week later it has fallen back again and now the exchange rate has stabilised. The same thing was seen following the “fake news” on potential shortages that led to hoarding of certain products and the need to stock up on essentials. What little panic buying there was quickly subsided and now people have even started making funny internet memes about the shortages of salt, which proved to be nothing more than a fake story from one of Russia’s TV shows. In fact, this explosion of memes about martial law and many anecdotes about it suggests that whatever the concerns are, Ukrainians are panicking much less than one would expect. Treating events with humour shows they really have stamina.

There are two more important aspects that deserve to be mentioned. First is the fate of the Ukrainian sailors captured and detained by the Russians. All of them have been taken to Moscow and detained in the notorious Lefortovo and Matrosskaya Tishina prisons. Nothing good awaits Ukrainian sailors there. Moreover, according to Poroshenko’s press-service, Russian President Vladimir Putin has ignored requests for a call from the Ukrainian president. This leaves us in an uneasy situation when most probably those 24 sailors will simply be added to the already large group of Ukrainian political prisoners in Russia. How to prevent it and get them out is really a pressing issue. In the meantime, Ukrainians are sharing lists of the captured soldiers and instructions on how to write letters to them.

The second aspect is the economic implication for our Azov ports. Because of the attack and the uncertainty it brings, in the last few days the ports there have seen almost no ships. It is not necessary to remind everyone that our Azov ports lie close to the frontline with the occupied Donbas, with Mariupol being right next to it. Fear of losing jobs and uncertainty about the future of the ports is a much bigger and more pressing issue for the region than the duration of the presidential campaign. Also, martial law will affect the contacts between people living in the occupied territories; one of the biggest fears is that it will become harder to cross the contact line and travel to and from Ukraine.

Martial law is much more than a possible game-changer for Poroshenko’s ratings and here in Ukraine it is not the only issue that is being discussed. The Azov sea incident is very complicated on many levels and for many Ukrainians the fear of an even bigger war is much greater than the fear of how martial law will influence the ratings of politicians. I would even say, many will look at how it will influence the economy rather than the upcoming elections. However brutal, it is quite understandable: elections are in four months, but the closest exchange point is just a few blocks away.

An activist, journalist and co-founder of Global Ukrainians, an international network of Ukrainians worldwide, Kateryna Kruk was awarded the Atlantic Council Freedom Award for her work communicating the Euromaidan revolution to the world. She predicted a frozen conflict in July 2014, which has largely come to pass, and now comments on the progress of crucial reforms in Ukraine.