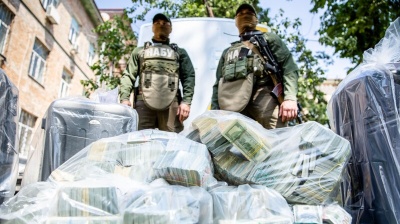 Corruption allegations continue to plague Ukraine even in times of war. However, Kyiv is making an overt effort to clamp down on misconduct following pressure from Western allies.

Two politicians have been dismissed over separate corruption accusations. Lawmaker Pavlo Khalimon, a member of the ruling Servant of the People's Party, was fired on January 23 following an investigation that revealed he had purchased a discounted mansion in Kyiv over the summer but didn’t register it under his own name in an attempt to hide the purchase, the Kyiv Independent reported.

"The ethical component of this act contradicts our values and our vision of what a lawmaker should do during the war. For this, Pavlo Khalimon will be dismissed from the post of deputy head of our faction," head of the ruling parliamentary faction Servant of the People, Davyd Arakhamiia, wrote on Telegram.

Following the investigation by Ukrainian Pravda, it was discovered that Khalimon had purchased the estate in central Kyiv for only UAH10mn ($280,000) in an area that typically sees property sell at UAH50-60mn ($1.4-$1.6mn). Instead of registering the asset under his own name, he registered the house under Anastasiia Kotelenets, an associate of his former assistant, in an apparent bid to hide his expensive war-time purchase.

“If you are a people's deputy and have a couple of extra million hryvnias, then you should help your country. This is your duty,” Arakhamiia said.

“Some people have lost their minds and loot without fear or remorse,” he wrote in a separate message.

The day before, Deputy Minister of Infrastructure and Communities Development Vasyl Lozynskyy had also been fired over corruption concerns after the National Anti-Corruption Bureau of Ukraine (NABU) accused him of receiving a $400,000 kickback.

The Bureau claims to have detained Lozynskyy as he was receiving the money during an operation against an organised criminal group. The group planned to pocket part of the UAH1.6bn ($46mn) allocated by the Cabinet of Ministers in summer 2022 to purchase emergency equipment in preparation for the cold and dark winter period.

Lozynskyy is alleged to have received the payment for facilitating the conclusion of contracts for the purchase of equipment at inflated prices of almost UAH280mn with pre-determined business entities. The investigation is ongoing to find the remaining gang members, one of whom was detained attempting to leave the country.

“The Government of Ukraine is committed to the principle of zero tolerance to corruption and continues to develop the anti-corruption framework,” the government stated in response.

The stench of corruption clings to Ukraine’s international reputation, potentially jeopardising future investments into the war-torn country. Kyiv knows this and has upped its efforts to crack down on dubious individuals. Last week, the ex-head of Naftogaz, Ukraine’s national oil and gas giant, was charged with illegally rewarding himself a $10mn bonus.

In October, former chairman of the National Bank of Ukraine (NBU) Kyrylo Shevchenko was placed on NABU's wanted list over missing funds amounting to UAH206mn during his leadership of the state-owned Ukrgasbank. Days before, the head of Motor Sich, Viacheslav Bohuslaiev, was detained for the illegal supply of wholesale batches of Ukrainian aircraft engines to Russia.

The European Union is conscious that corruption will hinder the reconstruction process and has made sure that transparency and judicial reforms are part of the requirements Ukraine must meet in order to achieve EU accession. Kyiv is seemingly following this path, eager to prove to the Bloc that it's taking corruption seriously.

Ukrainian President Volodymyr Zelenskiy implemented major reforms over the summer, including appointing a new head of the Special Anti-Corruption Prosecutor's Office, a position that had been vacant for nearly two years. Moreover, the government expects to fill the position of Director of NABU in the very near future.

Zelenskiy’s efforts have been rewarded by the EU, which agreed to disperse the first tranche of the €18 financial support on January 16. The Bloc had previously withheld funding last year due to fears that the money would end up in the wrong hands.

To help with Ukraine’s efforts, the European Council announced a €50mn Action Plan in December to implement steps outlined by the European Commission’s opinion on Ukraine’s EU membership application. This includes combating corruption, developing an independent, effective and trusted judiciary and promoting freedom of expression and independent media.

Poland basks in the glory of being Europe’s chief ally of Kyiv
VISEGRAD BLOG: When Eastern European states speak out they are now listened to
Ukrainian MP urges Kyiv to recognise Kosovo
#Kyiv's #Ukraine
Read in IntelliNews Pro
Get IntelliNews Pro

Poland basks in the glory of being Europe’s chief ally of Kyiv
VISEGRAD BLOG: When Eastern European states speak out they are now listened to
Ukrainian MP urges Kyiv to recognise Kosovo