Kyrgyz, Tajik troops move back from border after fighting that killed dozens 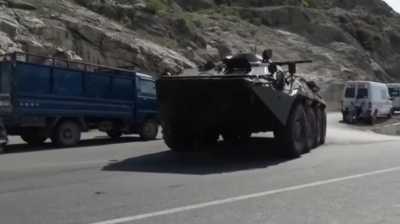 Fighting broke out on a scale not seen in years.
By Kanat Shaku in Almaty May 3, 2021

Kyrgyz and Tajik military units have withdrawn from border areas under an agreement struck by officials in the wake of the worst violence seen at the disputed Tajik-Kyrgyz frontier in decades.

A series of deadly clashes on April 28-29, originally sparked by an argument related to water rights, resulted in 36 Kyrgyz citizens killed, including a five-year-old boy, and 183 injured, while 50,000 people fled their homes, according to Kyrgyz authorities. The Tajik side has not officially provided any updates on its casualties, but RFE/RL Tajik Service has reported that 16 Tajik citizens died, while 90 were injured.

Machine guns and artillery were deployed during clashes and many buildings were torched leaving terrible scenes of destruction. Property damage on the Kyrgyz side, in Batken region, included that inflicted on 78 private homes, two schools, one medical point, two border checkpoints, 10 petrol stations, a kindergarten, a police building and eight shops, RFE/RL said. The Committee for Emergencies in Tajikistan's northern Sughd region said that 14 private houses were destroyed, while two houses and a maintenance building were damaged in three neighbourhoods of the city of Isfara. In addition, a school building and a private house were partially damaged in the village of Ovchikalacha in Bobojon Gafurov district.

The violence mainly took place near Tajikistan’s Vorukh exclave located within Kyrgyz territory following a dispute over the installation of surveillance cameras at a water distribution point near the exclave. It appeared to initially break out between locals but quickly drew in security forces from both countries.

The Kyrgyz Border Service said on May 3 that the situation in the area remained calm and stable following the withdrawal of the military units.

The head of Tajikistan's State Committee for National Security, Saimumin Yatimov, who visited the Vorukh exclave on May 2, said during the visit that Tajik military forces had been withdrawn from the border.

The Tajik Prosecutor-General's Office said on May 3 that it had launched a probe against a group of Kyrgyz military personnel, whom they accused of instigating the deadly conflict.

The statement came a day after the Kyrgyz Interior Ministry said it had launched 11 criminal cases into "mass disorder, crimes against peace, hooliganism, the destruction and damage of private property, illegal border crossings, and murder."

Disputed segments of the knotting, twisting Kyrgyz-Tajik border are a frequent site of violent clashes between residents and border guards. However, the shootout has taken the situation to a new level.

Nevertheless, the violence does not appear to have been facilitated by either Tajik or Kyrgyz authorities. Both nations are members of the Russia-led Shanghai Cooperation Organisation (SCO) political, economic and security alliance. They are also both heavily intertwined in Russia and China’s regional integration projects and initiatives and have Russian military bases on their territories. An escalation of such a conflict would not be in the interests of any major political player, including those that do not border Central Asia.

Much of the violence on the border has always been of a spontaneous nature, often driven by aggrieved local inhabitants, even those cases in which shootouts between border security personnel were involved. The growing tensions at the border, in many ways, reflect overall social angst in economically impoverished nations—Kyrgyzstan and Tajikistan are Central Asia’s two poorest nations—in the face of the COVID-19 pandemic that has left thousands of families without incomes. This is especially relevant when it comes to Tajikistan and Kyrgyzstan because large swathes of their populations normally rely on remittances sent home by migrant workers in Russia.

The European Union, the Organisation for Security and Cooperation in Europe (OSCE) and Russia have urged the two ex-Soviet nations to respect the cease-fire agreement.

Human Rights Watch (HRW), meanwhile, has called for an immediate investigation to be held into all parties allegedly responsible for war crimes against civilians.

“During a telephone conversation, the leaders of Kyrgyzstan and Tajikistan once again confirmed that all military equipment will be withdrawn from the border areas on both sides,” the Kyrgyz government’s readout of the conversation said.

The presidents agreed to form a joint commission to audit all military equipment deployed along the perimeter of the border.