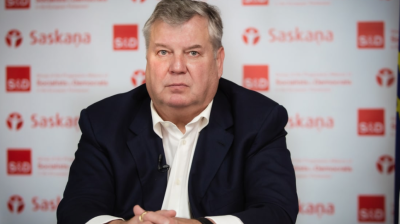 Russia's war in Ukraine has ushered in significant changes in all areas of life, including the poll ratings of Latvia's political parties, with the Latvian Parliament Saeima elections looming on October 1.

The latest poll carried out by SKDS for Latvian Television reveals that in March long-time poll leader Harmony (Saskaņa) – which traditionally takes much of its support from Latvia's ethnic Russian minority – saw its support collapse. It is now in fourth place in the party political pecking order.

Topping the poll is the New Unity (JV) party of Prime Minister Krisjanis Kariņs with 9.4% support, followed by the opposition Greens and Farmers Union (ZZS) on 7.7%.

Third place is held by the nationalist National Alliance (NA) with 7.2% support from voters, ahead of Harmony on 6.7% – a drop of more than 10% on the previous month.

Next in line is the liberal Development/For (AP) with 5.4%, the left-of-centre Progressives with 4.9%, LSM.lv, a Latvian news website reported.

Interestingly, one of the gainers on the month is the Russia-friendly Latvian Russian Union (LKS), which gained 0.8% to reach 3.2% support, suggesting that some of Harmony's more radically pro-Russian supporters have switched allegiance to LKS while more moderate voters have either chosen another party or stepped back from political engagement.

The Conservatives (K) continue to be the lowest-placed of the coalition parties, remaining unchanged on 3.1% support.

Two recently formed populist parties appear to have registered only briefly in voters' affections. Both Latvia in First Place (LPV) and For Each and Every (KuK) saw support fall away, while another fairly new party, Stability! appears in the rankings for the first time with 2% support. It wants to reduce the number of Saeima deputies and have a directly elected president.

While several of the parties will take succour from increased ratings, celebrations would be premature. The number of people saying they remain undecided about which way to vote increased from 24% to 29% from February to March, though the number of people saying they didn't intend to vote at all fell from 18% to 13%. That still means well over 40% of the electorate remains up for grabs.

The SKDS survey was conducted in March by surveying 1,820 eligible voters.

In a Saeima election, a party wins seats only after it has managed to attract 5% of votes cast. Factoring that into the calculations, it would mean than the next Saeima included eight political parties.