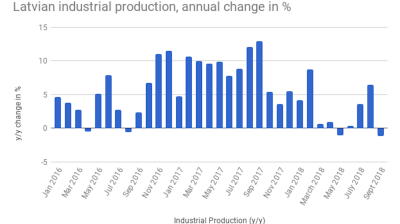 Output fell for the second time this year, bringing back worries of a slowdown in the industrial sector that could impede economic growth in the third quarter. The Baltic state’s GDP grew a seasonally adjusted 4.4% y/y in April-June, slowing down in comparison to the seasonally adjusted expansion of 4.8% y/y in the first quarter.

The fall in output in September owes to a drop of 12.6% y/y in electricity and gas supply that follows a robust expansion of 16.9% y/y in August, CSB data showed.

Other segments expanded, with manufacturing registering growth of 2% y/y, 1.9pp below the annual growth recorded in August. On the other hand, growth accelerated to 2.7% y/y in mining and quarrying after expanding 1.5% y/y in the eighth month.

Within the manufacturing sector, seven of 16 segments recorded falls in annual production growth in September, compared to ten in August.

Production fell the fastest in the segment of repair and installation of machinery and equipment, at 17.2% y/y. Growth was fastest in manufacture of electrical equipment, where production jumped 35.6% on the year.

In January-September, industrial production expanded 2.5% y/y in calendar adjusted terms, compared to a growth of 9.8% y/y in the same period in 2017.

CAPITAL ECONOMICS: CEE growth comes off the boil in 2019, but loose money and strong demand will bolster growth in 2020