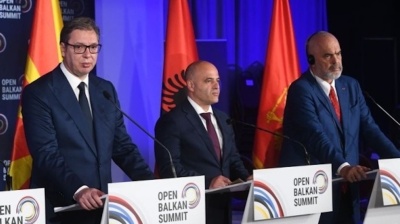 Serbian President Aleksandar Vucic and the prime ministers of Albania and North Macedonia, Edi Rama and Dimitar Kovacevski, will travel to Brussels on June 23 to attend the EU-Western Balkan summit, having dropped their plans to boycott the summit due to the Bulgarian veto that has blocked the progress of North Macedonia and Albania, the three leaders announced on June 22.

Bulgaria is vetoing the start of EU accession talks with Skopje over language and history issues and is setting other conditions that North Macedonia has to meet to be allowed to launch EU accession talks. Albania is also blocked as the two countries are coupled in the process, while Serbia has little hope of moving closer towards membership.

A day earlier, Vucic said that he spoke with Rama and Kovacevski about the upcoming EU summit in Brussels and that following consultations with the governments and advisers, on June 22 they would announce their decision on whether or not they will attend this meeting.

Expressing his frustration with the stalled EU accession process, Rama tweeted on June 21: “It seems that another ‘No, sorry!' is gonna be what we will hear at the end! The whole Union kidnapped by Bulgaria it is not a good spectacle to watch! What to do there?!”

However, the three leaders changed their initial plan and decided to travel together to Brussels, to present their views about EU enlargement.

First Vucic’s cabinet announced in a tweet that after talks with Rama and Kovacevski they decided to attend the summit.

“After detailed and comprehensive consultations with advisors and members of governments, the leaders of the three countries decided to go to the summit, agreeing on principles that will be the main backbone of talks with numerous EU officials,” Vucic said in a tweet.

He added that the decision to participate and the joint approach at the Brussels summit is another step in their efforts towards progress on their EU path, but also a clear signal that despite numerous obstacles, the three countries will continue to make a constructive contribution on the path to EU integration.

“We are aware that the topics we will discuss at the summit will not be easy, but our participation will once again show and confirm our commitment to the European path of Serbia, Albania and North Macedonia,” Vucic said.

“We’ll attend the EU Council meeting. There won’t be much to hear about us but we’ll ask to be heard on the idea of a new European Political Community which we support, on the Open Balkan which takes forward the spirit of Europe and on being kidnapped by Bulgaria which destroys the EU concept,” Rama said in a tweet.

Rama added that the he heard some positive news from Bulgaria about lifting the veto.

“Too early to be optimistic and too little to change the part of the tomorrow [June 23] speech where Bulgaria is criticised as a country which has kidnapped two Nato countries while there is a hot war at the Europe's border!” Rama said.

“I, Edi Rama and Aleksandar Vucic made a decision to confirm again the position that North Macedonia, Albania and Serbia have a European future. If the progress of the European integration process is not ensured, it will be a serious problem and a blow to the EU credibility in the Balkans,” Kovacevski said in a Facebook post.

On June 23, the EU leaders will address Western Balkans countries’ accession paths, ahead of the European Council's meeting which will start in the afternoon. The EU summit will end on June 24.

COMMENT: Towards sustainable, safe and smart roads in the Western Balkans

Albania and North Macedonia remain stuck in EU accession process
Albania trails neighbours in auto-parts production but economists see a chance to catch up
COMMENT: Towards sustainable, safe and smart roads in the Western Balkans