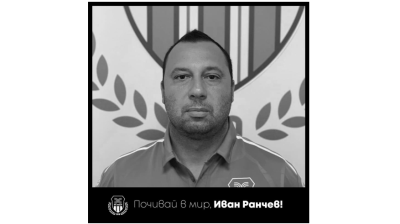 A lightning strike killed the coach of Bulgaria’s Hebar football team during a friendly match on August 29.

Heavy rains hit the country over the weekend with hail storms devastating production at villages near the city of Plovdiv.

Ivan Ranchev, 41, was killed on the spot by a bolt of lightning shortly after the match started. Members of his teams said the heavy thunderstorm began unexpectedly during the match in Lesichovo. Several players were also knocked to the ground.

According to Ranchev’s teammates, most likely the bolt of lightning struck him as he was wearing a fitness bracelet.

He was taken to the locker room after falling onto the pitch, and artificial respiration was attempted but his heart stopped beating after a few minutes.

"After the lightening stroke, Ivan fell on the ground. We brought him into the locker room and started heart massages, I held his hand until the end. He had pulse for a few minutes," one of Ranchev's teammates, Stoyan Ivanov, dubbed "The Cat", said as quoted in the press release.

Ivanov, also at the match, said it was already too late when the medical team arrived. He also announced that there were two lightning rods in the locker rooms at the stadium in Lesichovo.

“We express condolences to all relatives to the 41-year-old coach in the Hebar school Ivan Ranchev. Several hours ago he became a victim of a tragedy during a match in the village of Lesichovo,” Hebar FC's fan club wrote on Facebook.

On August 30, the prosecution launched a probe into the case.

Ranchev was born in the town of Stamboliyski on February 28, 1980. Over the past 20 years, his sports career has been connected to football in Pazardzhik, southern Bulgaria, and the region. He was a midfielder for the Hebar and Benkovski teams in Pazardzhik and for Thracia in Stamboliyski. Before becoming a coach, Ranchev played many matches with Hebar in Bulgaria's third league and in the second league in the 2006-2007 season.