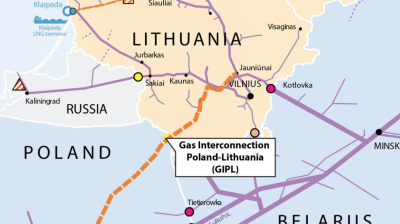 Vilnius has decided to completely give up importing pipeline gas from Russia.
By Linas Jegelevicius in Vilnius May 6, 2022

One of Lithuania’s most important strategic energy projects of the last decade, the €500mn gas interconnector (GIPL) with Poland, was officially launched on May 5.

According to Lithuanian Energy Minister Dainius Kreivis, the 500km pipeline will open the way to the Western European gas market not only for Lithuania but also for Latvia, Estonia and Finland. Until now, they have only been able to buy pipeline gas from Russia.

The energy minister said that the GIPL pipeline opened slightly earlier than planned due to the tense situation in the region.

“The preliminary plan was for mid-year, but the situation in the region is now tense, companies have completed the paperwork faster, the pipeline has been submitted for evaluation and we can open it earlier,” Kreivys told LRT Radio.

Energy experts say the gas pipeline between Lithuania and Poland is one of the most important energy projects since independence. The energy minister said that the GIPL pipeline will not only make gas supply more secure, but also reduce the cost of maintaining Lithuania’s LNG terminal in Klaipėda. Vilnius has decided to completely give up importing pipeline gas from Russia.

“Once we are free of Russian gas, we need to have a gas system that is more stable and better functioning. The Polish pipeline and the interconnections with Latvia help us maintain a sustainable system,” Kreivys said. “Secondly, the system will allow us to have more gas competition. Polish suppliers will be able to compete on our markets.”

According to the minister, Poland is planning to use Lithuania’s LNG terminal to supply gas to its power plant in Ostrołęka. “This means that the terminal will be probably 90 to 100 percent occupied, the highest rate in Europe,” and therefore the cost of the terminal for ordinary consumers may go down, he said to LRT, the website of Lithuanian national broadcaster LRT.

Last week, Russia stopped supplying gas to Bulgaria and Poland. Asked how much Lithuania will be able to help Poland if it runs out of gas next heating season, Kreivys said that Vilnius would chip in, if necessary. However, Poland should be able to replace Russian shipments with gas from Norway by the end of the year, via the new Baltic Pipe to be launched in autumn, he added.

“By the end of the year, Poland will be secure,” Kreivys said. “Once the Baltic Pipe is up and running, our region may be able to get some gas from Poland when it needs it. As I said, the GIPL pipeline is a huge guarantee of our security.”

The EU is moving towards banning Russian oil imports in Europe and phasing out Russian gas will be the next step, Kreivys said. For that, Europe will need to build more LNG terminals.

“Germany plans to build three terminals by the end of the year, which will supply up to 20 percent of its total gas consumption. We also hear that the Finns and Estonians are planning a terminal. I have spoken to the Finnish minister for economic affairs, and he has assured me that they are planning to have a terminal by the end of the year,” the Lithuanian energy minister said.