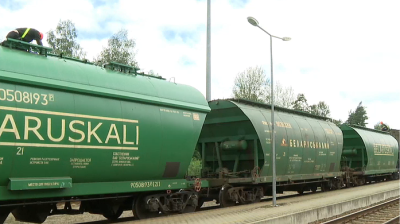 The Lithuanian government is to terminate the agreement between its state-run railway company Lithuanian Railways (LTG) and Belarus potash producer Belaruskali, saying that it runs against the national interests of Lithuania. The decision will come into force on  February 1, meaning a full stop to all transit of Belarusian potassium via Lithuania.

Belaruskali came under US sanctions in August 2021 and the US ban on sales of Belarusian potash took effect on December 8, 2021. However, potash continued to be exported through Baltic ports, which caused a public outcry in Lithuania, prompting calls for Prime Minister Ingrida Simonyte and other members of the government to resign.

Simonyte announced on December 14 that neither she nor her government would step down. Instead, the head of LTG  stepped down over the debacle.

Lithuania insists it did not break international sanctions by continuing to permit exports by Belaruskali, but the affair has been extremely embarrassing for the government because it has been one of the most strident voices calling for sanctions on President Alexander Lukashenko's regime. Belarus is currently engaged in what Vilnius has termed "hybrid warfare" by encouraging Middle Eastern migrants to use the country as a gateway to the EU via the Lithuanian and Polish borders.

On December 21, 2021, a special Lithuanian governmental commission vetting deals by strategic enterprises ruled that the 2018 contract between Belaruskali and LTG was not in line with the country's national security concerns. The conservative-liberal Lithuanian government then agreed on January 12 that the state-owned railway company must terminate its contract with Belarus' potash giant Belaruskali, because it clashes with national security interests.

“As of February 1, it  is no longer valid,” Transport Minister Marius Skuodis said after the cabinet meeting. Fertiliser shipments under the contract must stop by that date, because the government’s decision leaves no legal basis for them to continue, Skuodis added.

While heavily criticizing Lukashenko, many European countries have continued to cash in on trade with Belarus during 2021. According to the Belarusian statistical bureau Belstat, the EU's imports from Belarus in the first three quarters of 2021 increased by 96.1% in comparison to the same period in 2020. Bloomberg reported last year that the EU’s statistical agency Eurostat showed a 58% increase in EU imports from Belarus between January-August 2021 in comparison to the same period in 2020.

Despite being some of the EU’s harshest critics of Belarus, the three Baltic states’ trade with Belarus increased significantly over the course of 2021. Landlocked Belarus has long used the ports in the Baltic states to export its products from the potash, petroleum, wood, and metal industries, which are among the Belarusian regime's main foreign currency earning industries.

During 2021, Belarus benefited from higher global prices on its biggest export products. This price rise caused a major upswing from Belarusian exports in 2021, dubbed the Belarusian “export miracle”, and much of last year's trade increase can be attributed to it.

In a recent article, Radio free Europe/Radio Liberty (RFERL) notes that Latvia’s trade with Belarus increased by more than two thirds in the first 10 months of 2021 compared to the same months in 2020, with more than half of the imports being wood or products of wood. Estonia imported €522 million worth of goods from Belarus over the same period, doubling its amount compared to 2020. Lithuanian trade with Belarus in turn, reached €1 billion  in 2021, an increase of 50% compared to 2020. Comparing the summer months of June, July and August for the past three years, one can notice a marked increase in Belarus export to the Baltic states even with pre-pandemic levels.

According to data from the UN Comtrade database, Belarus' trade with Estonia in the summer months of 2021 increased three times in comparison to the same period of 2019; the exports to Latvia saw an 80% increase and exports to Lithuania a 75% increase when comparing the same periods.

The EU is, however, not the main destination of Belarusian potash exports. According to numbers from UN Comtrade, in 2019 (pre-pandemic), Brazil, China, Indonesia, Morocco, Viet Nam and India received 54% of Belarus' total potash exports.

The design of the EU’s sanctions has received criticism from the exiled Belarusian opposition leader Svetlana Tsikhanouskaya, who in an interview with Euractiv in December 2021 said that it left too many loopholes. In an e-mail to RFERL,  Kateryna Bornukova, a research fellow at the Belarusian Economic Research and Outreach Center (BEROC), said the EU sanctions on Belarusian potash are only limited to about 20% of Belarusian potash exports, and many EU countries want to see even those sanctions lifted.