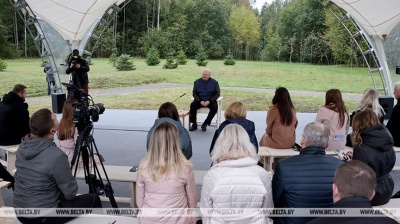 Lukashenko speaking at the Khatyn memorial on September 23. / Belta.by
By bne IntelliNews September 26, 2022

According to Lukashenko, Belarus’ “opponents” were wrongfully claiming that Belarus would soon begin a similar mobilisation as Russia; to this he said: “We are not going to mobilise people. This is a lie.” Instead, Lukashenko reiterated what he’s said several times before this year “We will fight only when we have to defend our home, our land.”

Lukashenko commented on the various military drills which Belarus has held this year and on the “people’s militia,” for which he ordered the recruitment of thousands of people earlier this year.

Lukashenko drew a connection with this and Belarus “studying modern military operations, adjusting the army and making it more mobile for several years already,” and with the need to respond to “possible threats and attempts to commit acts of terrorism,” likely referencing the wave of railway sabotages that the “Belarusian railway partisans” conducted earlier this year.

During the same speech, Lukashenko made a surprisingly long exposition on the questions of amnesties and pardons for political prisoners. According to Lukashenko, he was willing to pardon certain people if they or their relatives begged him or applied for pardons, and he said that amnesties that reduce the prison sentences of certain people could come in the future.

Evidently, Lukashenko is attempting to portray himself as a noble, understanding and responsible leader who takes care of his people. This is a new tactic compared to what his security forces have been engaged in throughout this and last year. The split in Belarusian society has become evident even to the Minsk regime, and it was last seen clearly during Lukashenko’s “history lesson” for Belarusian students.

This is likely a part of Lukashenko’s tactic to use both a carrot and a stick, intimidating and repressing the opposition domestically while also keeping up a human face for his own supporters. In the end, he hopes to break down the will of both the remaining domestic and the exiled opposition, and perhaps slowly create a “political thaw” in the coming years.

On the side lines of the UNGA meeting in New York, exiled Belarusian opposition leader Svetlana Tikhanovskaya told Forbes that “our partisans” are ready to conduct more acts of sabotages as they did against Russia military transports along Belarusian Railways in Spring this year. In which case the effectiveness of Lukashenko’s “people’s militia” would be put to the test.

Ukraine on its toes at the Belarusian-Ukrainian border

Earlier in September, Ukraine reinforced its border security with Belarus amid increased provocations and said that it was ready for “any course of events.”

According to the spokesperson for Ukraine’s Border Service, the situation along Ukraine’s border with Belarus is stable. However, Ukraine has received information which could indicate a planned false flag operation on Belarusian territory or infiltration into Ukrainian territory.

On September 22, 300 sets of Ukrainian military uniforms seized from warehouses in Kherson Oblast were delivered to GardService in Belarus. GardService is a Belarusian security company, which according to Ukraine is currently being used as the base for 130 Russia mercenaries from the Liga PMC who arrived in Minsk along with weapons and ammunitions on September 20.

Ukraine is for now preparing for “possible subversive operations” in the vicinity of Pinsk, Ivanovo and Kobrin.

When the Minsk regime realised that Russia’s invasion would not go according to plan, it tried once again to position itself as a security guarantor and peace mediator between Russia and Ukraine in late March. However, when this attempt failed, Belarusian Foreign Minister Vladimir Makei basically disappeared from Belarusian state media reporting, while he was frequently featured last year.

Amid the UNGA meeting in New York, Makei has reappeared in the state media news coverage, and he’s apparently on a new offensive to portray Belarus as a peaceful country working for everyone’s best interests. Today, Monday 26 September, he met with the UN Secretary-General António Guterres in New York. During their meeting, Makei “voiced support for the UN efforts to overcome the global food security crisis,” and “noted that Belarus can play a role in addressing this issue.”

In May, Lukashenko proposed to Guterres that Belarus’ could allow Ukrainian grain to pass through Belarus to Lithuanian ports if the West lifted some of its sanctions. However, this proposal was strongly rejected by Kiev and its Western allies.

Shortly after meeting with Guterres, Makei made a statement on retaining channels of communication with the EU despite sanctions. According to Makei, Belarus remains “committed to dialogue,” adding that Belarus would like to diversify its economy and politics but said that “unfortunately, we do not see any readiness on the part of the European Union.”

Clearly this is a signal from Minsk that it wishes to de-escalate the highly tensed political climate between Belarus and the EU. Most likely, however, this comes from the regime’s fear of the future effects of the strong Western sanctions pressure, which is already taking a heavy toll on the Belarusian economy.

Thus it is not reflective of any real wish for de-escalation, but Minsk is rather feeling out the EU to see if it’s tired of fighting with the Minsk regime and will accept that it remains in power. This is the same type of ambivalent positioning as Belarus had in April and stems from its insecure position of being completely dependent on the Kremlin, both politically and economically.

For instance, if Minsk was actually interested in a real de-escalation of its relationship with the EU it would not have detained the EU Chargé d’affaires in Minsk three weeks ago.

In an interview with FRANCE 24 today, Makei said that “Belarus does not consider using any weapons against anyone, to say nothing of nuclear weapons.”

According to Makei, Belarus was “absolutely against the use of nuclear weapons,” saying that “we are interested in ending the conflict as soon as possible. We are not going to strike.” However, he nevertheless added that Belarus needed to “take care of its security,” saying that it was worried about the increase in Nato and US forces in its neighbouring countries.

It’s quite clear that Belarus is not interested in being dragged into Russia’s invasion of Ukraine any more than it already is. Instead, Lukashenko’s talks of “studying modern military operations” could rather be put in relation to an idea of “strategic deterrence,” which bne IntelliNews reported on in May.

However, Lukashenko’s statement on pardons and amnesties should not be interpreted as a sign of weakness. Rather, it’s a part of the regime’s attempt to reset the political climate and while a “political thaw” might not be envisioned to come already next year, Minsk could have its goal set on a “return to normal” over the course of several years. In the end, therefore, there’s nothing indicating that the regime in Minsk is prepared to loosen its grip on power in the country or to decrease its economic and military integration with Russia, rather it has once again merely switched tactics.