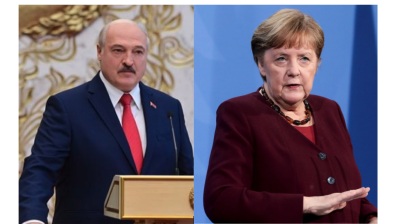 Belarusian leader Alexander Lukashenko demanded that the EU recognise him as president and drop sanctions on him imposed after the falsified presidential elections last summer in a conversation with German Chancellor Angela Merkel. / Wiki
By bne IntelliNews November 18, 2021

Belarusian leader Alexander Lukashenko demanded that the EU recognise him as the legitimate president of Belarus and told German Chancellor Angela Merkel that the EU should withdraw its sanctions on his country during a telephone call on November 16.

Merkel has talked to the Belarusian strongman twice this week in an effort to de-escalate the growing humanitarian crisis on the border between Poland and Belarus, where thousands of migrants from the Middle East are camped out in the woods trying to get over the border into Europe.

Lukashenko engineered the crisis by flying at least 10,000 refugees by promising them easy access to the EU and facilitating their attempts to cross the border illegally.

The crisis has come to a head in the last week when a large number of refugees marched to the border and tensions escalated rapidly after a crowd of several hundred mostly young men attempted to storm the border. The Polish border guards, supported by soldiers, drove them back with water cannons, tear gas and stun grenades.

The EU and US have imposed four rounds of sanctions on Lukashenko following the blatant falsification of the presidential elections last August 9 that immediately led to mass demonstrations and a brutal crackdown by Belarusian riot police. More and extremely tough sanctions were imposed after his regime forced a commercial Ryanair flight to land in Minsk and arrested top opposition blogger Roman Protasevich and his girlfriend on May 23.

The EU has also imposed sanctions on Lukashenko personally and refused to recognise his landslide victory in the elections, throwing its support behind opposition leader Svetlana Tikhanovskaya, who most likely defeated Lukashenko in the poll.

Lukashenko wants to be recognised as the legally elected president and for sanctions to be lifted in return for ending the migrant crisis on Europe's borders, Estonia’s Minister of Foreign Affairs Eva-Maria Liimets revealed on November 16 following the conversation with Merkel on November 15.

"He wants the sanctions to be stopped, [and] to be recognised as head of state so he can continue," Liimets told ETV's evening news programme "Aktuaalne kaamera" as cited by ERR.ee, when asked what Lukashenko's demands are for ending the situation.

Lukashenko’s demands are very unlikely to be met. The EU foreign ministers convened on November 15 and agreed to impose a fifth round of sanctions that specifically targets airlines, tourist agencies and others directly involved in facilitating the inflow of refugees. Lists of names are being worked out now and could be adopted in the next month.

Liimets said it is important the newly expanded sanctions agreement prepared by the EU foreign ministers remain in place and the new sanctions are imposed on Belarus.

"In our view, it is important that the European Union remains united and exerts its influence on Belarus through action," Liimets said, adding new sanctions should be created as soon as possible. Liimets said the new round of sanctions will allow for sanctions to be imposed for human rights violations.

The November 15 call from Merkel to Lukashenko was the first by a western leader since rigged presidential elections in August 2020 handed him 80% of the vote. Merkel was slammed by critics, who complained that by talking to the Belarusian leader, she legitimised him and his regime.

No details have been released from the second conversation on November 17, other than that Merkel asked for EU humanitarian aid to be delivered to the refugees. Earlier this week EU President Ursula von Leyden announced Brussels would put €700,000 aside for aid for the migrants on the border.

The crisis on the border has eased a little in the last day as a large number of refugees have been moved to a logistics centre out of the cold and given bedding and food. However, a few thousand more remain camped in the woods.

The Iraqi government will also begin repatriating its citizens stuck on the Poland-Belarus border, with the first planes arriving on November 18. Several hundred migrants have elected to return home.

“Iraq will carry out a first flight for those who wish to return voluntarily,” Iraqi Foreign Ministry spokesman Ahmed al-Sahaf said at the weekend.

He did not say how many people would be able to board the first Minsk-Baghdad flight, but said Iraq had recorded 571 of its citizens stuck on the border who have expressed their willingness to be repatriated.