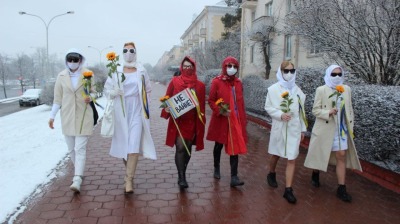 A rare sight in Minsk from this March when six girls marched along the street in white-red-white clothing and a sign reading "No to war!" in Belarusian, risking a month in prison for the clothing alone. / From Telegram
By bne IntelliNews March 11, 2022

Lukashenko and Putin are meeting in Moscow today, and according to Lukashenko’s press service they “will discuss key issues concerning bilateral relations, the development of union co-operation and economic co-operation in conditions of sanctions pressure.”

New sanctions are continuously hitting the Belarusian economy hard, with the regime powerless to respond with any effective measures to save it. As a response to the growing anti-war sentiment within the country, the Belarusian regime has been tightening the screws around public speech and private commercial interests in the country even further.

As Belarus continues to actively support Russia’s war against Ukraine, western sanctions keep raining down on the country. This week, western sanctions have hit three of Belarus’ largest banks, disconnecting them from SWIFT. In addition to this, Moody’s Investors Service cut Belarus’ credit grade to Ca as it expects default to be “increasingly likely.”

To understand the full scale of sanctions against the aggressing countries, one can think about the fact that even Minnesota lawmakers have outlined a plan to divest from assets which are tied to Belarus and Russia.

Of course, Minnesota itself has no greater impact on neither of these countries’ economies, but it serves as an example of a growing global trend which will further isolate Belarusian and Russian assets. When almost every instance of western economic actors shuns these assets, they rapidly become exposed, which creates an intense short-term risk and drives intense work in finding new capital from elsewhere.

The Belarusian regimes’ ramping up of repressions is certainly a way to compensate for the country’s rapidly deteriorating financial situation; but also, it is a way to save face, as it has become apparent to everyone that both within and outside the country that Lukashenko is not in control of Belarus anymore; Putin is.

The opposition vs the regime

Belarusian security forces have so far detained over 900 people for participating in anti-war protests, which have been the largest protests since the ones in 2020 against the fraudulent presidential elections.

After Belarus’ opposition leader Svetlana Tikhanovskaya announced the creation of a transitional cabinet as the national authority of Belarus, a new criminal case was opened against her by Belarus’ Prosecutor’s General’s Office.

Tikhanovskaya is now suspected of "having recorded and published on sites of the video hosting channel YouTube and the messenger Telegram a video with public calls for the commission of acts of terrorism and sabotage, high treason, and the commission of other actions aimed at harming the national security of the Republic of Belarus, acting with other unidentified persons,” and most recently she asked Canada to support her efforts in creating a government in exile.

In her statement Tikhanovskaya said that she would represent the Republic of Belarus and its people by the powers given to her by Belarusian voters in the 2020 presidential elections. The creation of this cabinet was backed by Latushko, who is currently leading the "National Anti-Crisis Management", which aims to facilitate a peaceful power transfer in Belarus.

Today Belarus' Information Ministry warned Belarusian users against calling for "terrorism and violence" on Facebook and Instagram. The warning came after Meta recently reported that it will stop blocking users' calls for violence against the Russian military.

The Information Ministry said that such posts could lead to criminal liability, and that access could be restricted to internet resources disseminating such materials.

During 2021 Belarusian authorities heavily ramped up the search for dissidents online, and created new laws which made certain posts or accounts on social media "extremist". These accounts became illegal to follow and their posts illegal to share. Running an extremist account can result up to seven years in prison.

As a result, the access to several newspapers such as Deutsche Welle, Current Time as well as the Belarusian news paper Novy Chas was blocked by Belarusian authorities in October last year. All because they were said to be spreading "extremist" material.

While Meta is facing pressure from Belarus' Information Ministry, Twitter has announced that it will be labelling media accounts with Belarusian state support as Belarusian state-affiliated media in an effort to curb disinformation about Russia's invasion of Ukraine.

On Sunday, Belarus’ security services arrested the head of the Raiffeisen bank, who is also an Honorary Consul of Austria, following a meeting he had with the National Bank of Belarus where he reportedly criticised the bank.

Austria is probably Belarus’ largest western investor, and the Raiffeisen bank has a well-established presence, as does one of Belarus’ largest mobile operators A1 which is of Austrian origin.

Belarus’ regime has gone after Austrian commercial interests before when it’s wanted to make a point to the West. Following the EU sanctions package against Belarus in December, Belarusian state propagandists went on a defamation spree against the Austrian ambassador, and the head of A1’s public relations department was arrested and forced to confess to politically motivated charges.

Cracks within the regime

According to Belarusian oppositional news outlets, people at Belarus’ Ministry of Foreign Affairs are resigning en masse due to the country’s participation in Russia’s war. In a leaked letter, Belarus General Consul in Munich resigned since she claimed that the country’s sovereignty was under threat due to the regime’s recent actions.

Already in January, American diplomats warned their Belarusian counterparts in New York that participation in a Russian invasion of Ukraine could lead to rifts within the regime, since members of the political elite could refuse a war with Ukraine.

What we’re seeing now is probably the beginning in a longer chain of high-level resignations. As many leaked statements from Russian officials have stated, many people at various high-ranking authorities around the country didn’t know that there would be a war. Most likely, this was also the case in Belarus, and this time the regime has gone too far even for parts of the political elite.

Many Belarusians have found refuge in neighbouring countries Ukraine, Lithuania and Poland since the Lukashenko regime started mass arresting people after the 2020 protests. Some are even returning the favour by creating Belarusian battle groups to support Ukraine’s defences. Today, Belarusians abroad are claiming that they’re facing discrimination for simply being Belarusians.

On Tuesday, the Georgian Security Service (SSG) denied reports of an unchecked influx of Russians and Belarusians as “deliberate disinformation”, as citizens feared that Lukashenko and Putin were planting agents throughout the country for a coming invasion.

Most Belarusians don’t approve of the invasion of Ukraine or even of current President Alexander Lukashenko. The people fleeing now are the ones who opposed the regime but had the courage to stay in the country after the fraudulent 2020 elections, and now they’ve had enough.

Of course, a lot of Belarusians are currently fleeing since the sanctions will make living and working in Belarus increasingly hard in the foreseeable future.

However, most Belarusians fleeing the country now simply can’t stand living there since the regime supports a Russian war with Ukraine. Especially the men are leaving, since they say they couldn’t possibly fight against Ukraine if the regime suddenly calls for general mobilisation.

This, and the fear for their Ukrainian friends’ and relatives’ safety has been most Belarusian’s biggest concern since the start of the war. Thus Belarusians are more afraid of their own regime than of sanctions or of Ukrainian counterattacks.

To many Belarusians their country is already occupied by the Lukashenko regime, who has been backed up politically, economically and most recently militarily by Moscow. Some 50,000 Belarusians have passed through arrest and detention since August 2020, and currently there are over 1,000 political prisoners.

In times of war, humanity shows its worst sides. Among them, that Belarusians who flee or who have already established themselves abroad are being scolded for their country’s regime’s actions, which they oppose, and which are widely out of their control.

We can’t let our solidarity with the people of Belarus and Russia be split over the actions of their autocratic rulers.