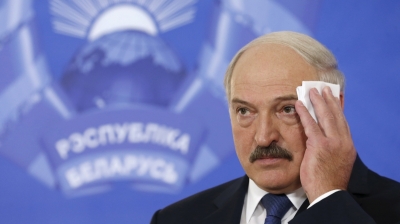 Belarus’ Prime Minister Roman Golovchenko has asked for increased economic support from Russia amidst the strong sanctions pressures. Belarus’ economy has taken heavy hits from the western sanctions, and the regime, together with Russia, is currently losing the information war on all fronts.

Today, Belarus’ General Chief of Staff Viktor Gulevich announced that Belarus was going to replace its five battalion tactical groups (BTGs) with five new ones. The five BTGs are allegedly acting as support for the border guards since Minsk deems it necessary to “secure the border” in case of a Ukrainian attack. This ran contrary to Lukashenko’s previous statement that the number of BTGs at the border with Ukraine would be increased to 10.

Last week, Belarus’ Ministry of Defence described the Ukrainian claims that Russia had fired on a Belarusian village to drag it into the war as “fake”; most recently, Ukrainian intelligence services have claimed that Belarusian soldiers might enter the war in Russian uniforms.

Minsk’s war rhetoric has kept intensifying since summer last year; the reason for this seems to be Belarus’ active support for the Russian military’s invasion through logistical and medical help, as well as allowing its territory to be used for missile stikes to be launched. However, no participation of Belarusian soldiers is in sight so far.

Gulevich’s and Lukashenko’s different statements are symptomatic of how Minsk (like Russia) is losing the information war. Lukashenko as usual says things that either haven’t been decided upon yet, or about which he simply lies, all in order to stir up the mood and make Ukraine and foreign diplomats worried that he’ll escalate the situation.

While Lukashenko and Putin allegedly agreed that Russia would supply Belarus with the latest military hardware (which Russia has refused to do since 1991), no real military escalation near the border is in sight from Lukashenko’s side.

While Belarusian opposition leader Svetlana Tikhanovskaya has kept giving more and more interviews on western news outlets, Minsk has had one of its largest channels, “Belarus 24”, shut down in Poland. Moreover, the popular social media platform Telegram shut down Belarus’ interior Ministry’s special forces’ channel and blocked it once more after they attempted to restart it.

One of Belarus’ top Wikipedia contributors was also arrested last week, allegedly after posting “false anti-Russian propaganda” on Wikipedia. While the western, oppositional or pro-Ukrainian narrative has lost another fighter, this is not a sign of Minsk winning or gaining ground.

Today, two large websites on banking and exchange information were shut down, keeping investors and businessmen further in the dark on what’s actually going on with the financial state of the country. Any domestic censorship, whether of financial info or of Wikipedia, is a sign that the regime can’t contain the spread of information on what’s actually happening and shows that it doesn’t have an effective propaganda narrative to counter with.

A plea for help

Yesterday, Golovchenko asked for the much needed restructuring of state debt, of which Russia owns about half. The matter is becoming more and more urgent, and Putin seems to be rolling his thumbs. Perhaps, he’s waiting for Lukashenko to support him militarily in the war.

Golovchenko was also quoted as saying: “Bearing in mind the high vulnerability of the Belarusian economy to external shocks, we hope for the Russian Federation's support at this difficult stage.”

Like Russia, Belarus has lost many foreign companies and investors since the start of the war; and just like Russia, not only private ones, but some of the most significant losses are the EBRD, World Bank and the EU, which have suspended their cross-border and transnational co-operation, which contribute to much needed analysis and financing of infrastructure projects.

One of Golovchenko’s other requests was reportedly to set Belarus’ gas imports from Russia in Russian rubles, indicating that the exchange rate problem is getting serious. However, the gas dependency notwithstanding, Belarus’ ability to withstand external shocks has worsened dramatically since 2020 on several fronts.

The sanctions pressure from the West has made the regime increase its repression on the private sector in order to feel like it is maintaining control in the country. This has led to several laws and decrees which have weakened the private banking sector, threatening their liquidity and holdings of foreign currencies.

Repressions against the IT sector and against the overall liberal opposition-leaning middle class have also led to a mass exodus of IT workers, which has slowed down the growth of the country’s IT sector. The sector carried the Belarusian economy through the 2020 price slump and helped overcome trade hindrances on the country's traditional export goods like oil and potash.

Furthermore, while Minsk imagined that its trade dependence on Russia would pay off, as it could be used to offset the sanctions pressure, this has proved to be a vulnerability when the Russian ruble is experiencing a dramatic fall and Russian industries are being disconnected from global trade flows. As the other members of the EAEU are noticing now, connecting to the Eurasian Economic Union’s supply chains has brought high risks and fairly little reward.

The heavy trade dependency on Russia is now, like in previous economic crises, rebounding on the Belarusian ruble, and the Belarusian companies will in future have a harder time acquiring technology or other goods from the previously abundant Russian market. Technologies as well as consumer goods from Russia will receive a higher premium than before, and western alternatives will keep disappearing.

Golovchenko suggested “an increase in the supply of Belarusian machine-building products to the Russian market, including by lifting the remaining administrative restrictions,” and requested participation of Belarusian manufacturers in the Russian import substitution programme. Herein lies another problem for Minsk: even though it might accept further economic and thereby also political integration as Golovchenko mentioned today, Russia is still keeping it out of its market.

Belarusian manufacturers won’t be included in the import substitution programme any time soon. Some trade barriers may be relaxed, but Moscow surely wants Russian companies to dominate its home market. Given Belarus’ relative competitive advantage in certain machine products, Moscow may be wary of allowing it to take over market shares as western companies pull out.