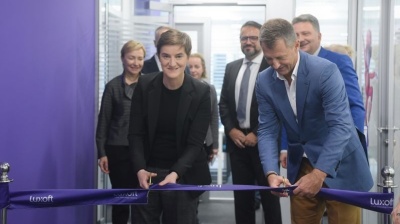 The opening of Luxoft's development centre in Serbia. / srbija.gov.rs
By bne IntelliNews November 20, 2022

Serbia has benefited from the arrival of thousands of Russian tech professionals, who left their own country following the latter's invasion of Ukraine. Russian companies like Yandex, as well as Western companies that have quit the Russian market, have also shown interest in setting up in Serbia.

While Luxoft is Switzerland-based, a Serbian government statement said 85% of the company’s employees are from Russia.

The company left Russia shortly after the invasion of Ukraine. “Luxoft, a DXC technology company, fully condemns the war and Russia’s aggression against Ukraine. We’re continuing our efforts to support and protect the people of Ukraine. We stand in unity with everyone around the world calling for an immediate end to this violence. As a direct result of this tragic war, Luxoft has decided to exit the Russian market,” it said at the time.

Prime Minister Ana Brnabic said Luxoft will find “new talents in Serbia and their knowledge [will] contribute to the further strengthening of the Serbian economy”.

Brnabic said she will try to bring more IT companies from Russia and other countries, and to make Serbia an IT hub.

Luxoft’s clients include major international companies in the automotive, banking and telecom sectors. It has more than 20,000 employees in 30 countries.

Meanwhile, on November 19,  Russian tech giant Yandex announced plans to open a development centre in Serbia at a meeting with Serbian Brnabic, a government statement said.

Yandex is not sanctioned by Western countries, which have placed sanctions on numerous Russian companies following the invasion of Ukraine, though founder Arkady Volozh was unexpectedly placed under EU sanctions in June.

Despite being an EU candidate country, Serbia has refused to impose sanctions on Russia, and is one of the few counties in Europe to which Russians can travel freely.

Yandex’s new development centre will employ more than 800 engineers, who “will work on the most modern IT solutions”, according to the statement.

At the meeting between Brnabic and the Yandex delegation led by the head of the company’s department for international policy, Maksim Kozlov, it was agreed to continue discussions and improve co-operation in education, given that the company works in the field of IT education.

Brnabic said that the Serbian government is open to co-operation and is ready to provide help and support global IT companies that open research centres in the country.

Belgrade expects the IT sector to achieve exports of more than €2.6bn this year.

Employees claim Bulgarian Facebook moderators controlled by Russia
3 days ago
EWDN: A year in review – How Ukrainian tech resisted the war in 2022
5 days ago
Pictures of Serbian President Vucic isolated at Davos go viral on social media
8 days ago
Russia to slash AI development support
8 days ago
Romania’s Digitail raises €11mn to scale up software for vet clinics
14 days ago