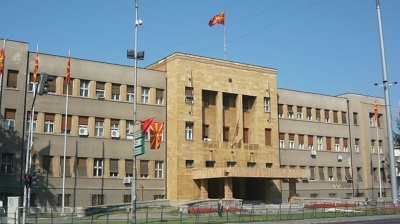 A two-thirds majority is needed in the Macedonian parliament (pictured) for the changes to be passed.
By Valentina Dimitrievska in Skopje October 16, 2018

The Macedonian parliament launched the debate on constitutional changes on October 15 related to the contested name deal with Greece, under which the country’s name will be changed to North Macedonia. The main opposition party is vehemently against the deal and it is unclear whether the government will put together a large enough majority to pass it.

Macedonia and Greece signed the name deal in June to solve the 27-year old dispute between the two-neighbours, which had blocked Macedonia’s Euro-Atlantic integration process.

The debate in the parliament could last up to ten days, but it is expected to end earlier. During the first day of the session, lawmakers from the governing Social Democratic Union of Macedonia (SDSM) were trying to persuade the conservative opposition VMRO-DPMNE MPs to vote for the changes, and stressed the benefits of implementing the deal.

The parliament has to approve the changes with a two-thirds majority, or 80 votes, but Prime Minister Zoran Zaev currently has only 72 MPs who will vote for the changes and needs eight more votes from the opposition. In such conditions, the future of the agreement is completely uncertain.

VMRO-DPMNE thinks that the agreement is harmful for Macedonia’s national interests and its leader Hristijan Mickoski said repeatedly that lawmakers from his party won’t support the vote.

Zaev told lawmakers that the adoption of the constitutional changes is the only way for the country to get Nato membership and to launch EU accession talks.

“Citizens want stability, security and economic prosperity and the only path to these aspirations is through Nato and EU membership,” Zaev said, adding that there is no alternative.

He also called for reconciliation between the two rival SDSM and VMRO.

Ilija Dimovski from VMRO-DPMNE accused the SDSM of violating the Constitution by negotiating changes to the constitutional name of the country with Greece.

“The government should have asked for a mandate from the parliament to discuss such changes,” Dimovski said, complaining that his party was not consulted during the negotiation process with Greece.

The Macedonian government enjoys Western support for the deal, as expressed by senior EU and Nato officials.

VMRO-DPMNE, which is an affiliate of the European People’s Party (EPP), is also under pressure from the West and from the EPP to support the changes, but so far has paid no particular attention to such calls.

Recently EPP head Joseph Daul said in a tweet that as important decisions loom for Macedonia and the entire region he was “disappointed by the opposition’s role in the process to date,” and added “constructive co-operation must prevail over boycott.”

VMRO-DPMNE boycotted the September 30 referendum when citizens were asked whether they support the name deal. The referendum ended with a turnout of only 36.9%, failing short of the 50% needed to be valid, but an overwhelming majority of those who voted, over 90%, said yes in the plebiscite.

This was sufficient for the government to move forward with the process and to launch the procedure of changing the constitution.

If the parliament fails to adopt the constitutional changes, Zaev said that early general elections will be held, most probably in November.

The last opinion polls suggest that SDSM will win a possible new election. The party hopes that together with its coalition partners it will win an overwhelming majority in the parliament that will allow it to vote in the constitutional changes without VMRO-DPMNE’s help.

If passed by the parliament, the constitutional changes should be made in five stages which will take at least 100 days. Most optimistically they will be completed by mid-January 2019, when the name deal will be sent to the Greek parliament for approval.

The government is in a hurry to make the changes as Greece will hold a general election in March, when the current Prime Minister Alexis Tsipras — who signed the deal with Zaev — may lose the vote.