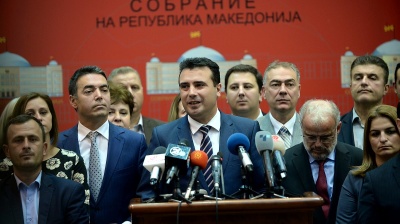 Prime Minister Zoran Zaev and his ministers at a press conference in the early hours of October 20.
By Valentina Dimitrievska in Skopje October 20, 2018

Macedonia’s parliament gave the green light late on October 19 to constitutional changes related to the “name deal” with Greece under which the country’s name will be changed to North Macedonia. This will unblock Macedonia’s Euro-Atlantic integration, which has been stalled for many years.

Real drama took place in the parliament before the session which was scheduled for 11.00 local time then postponed to 15.00 and finally started late in the evening after eight opposition MPs were convinced to support the vote.

The debate started on October 15, and since then the mood in the parliament had been constantly changing until the government succeeded in gaining the support of the required 80 deputies for the crucial vote.

80 lawmakers, or a two-thirds majority, finally voted for the process of constitutional changes to begin, leaving the remaining 40 MPs from the opposition VMRO-DPMNE disappointed that the initiative had ended successfully.

VMRO-DPMNE boycotted the September 30 referendum when citizens were asked whether they support the name deal. The referendum ended with a turnout of only 36.9%, although an overwhelming majority of those who voted, over 90%, said yes in the plebiscite. VMRO-DPMNE said after the vote that as well under 50% of the electorate had backed the name deal it did not consider it was obliged to support the constitutional changes in parliament.

Among lawmakers from VMRO-DPMNE who voted yes were several accused of involvement in the parliament violence in April 2017 or of other criminal deeds, and who were released from house arrest last week.

"I personally forgive everyone,” Prime Minister Zoran Zaev said on their release, alluding to the incidents in the parliament when he was among the injured.

Former minister of culture Elizabeta Kanceska Milevska, who has been investigated by special prosecutors in connection to the Skopje 2014 revamp project, also voted yes.

They agreed to vote on four conditions — inclusion of an amendment that will guarantee the Macedonian identity, gradual introduction of the new name for domestic use, annulment of the name deal agreement if Greece fails to ratify it and launching a process of national reconciliation.

All the opposition lawmakers who voted for the launch of constitutional changes were immediately expelled from VMRO-DPMNE.

The homes of MPs from VMRO who voted yes are now protected by special police units.

VMRO-DPMNE, which thinks the agreement is harmful, accused the governing Social Democratic Union of Macedonia (SDSM) of violating the Constitution by negotiating changes to the constitutional name of the country with Greece.

The party also claimed the SDSM had offered money in exchange for the votes of the eight MPs, which was resolutely denied by the Social Democrats.

The SDSM asked portals that published such claims to apologise and deny the information, warning they will face criminal charges if fail to do so.

Path to EU and Nato

The name deal signed in June is crucial as, if implemented, it will allow Macedonia to become the 30th member of Nato and to launch EU accession negotiations next year. So far Greece has blocked Macedonia’s efforts to join Nato and EU due to the unresolved issue, with officials in Athens saying they feared Macedonia could lay claim to the northern Greek province with the same name, though Skopje has denied having such intentions.

Four changes to the Constitution are required for the name deal to be implemented. The main change is that in the entire text of the Constitution of the Republic of Macedonia, the adjective "North" will be added before the word Macedonia.

Following the vote, Zaev thanked all MPs who voted in the parliament, saying it was a historic moment for the country.

“Macedonia will be part of the European family. Our dreams and visions for a better life in a better country will be fulfilled,” Zaev said in a late speech, accompanied by MPs from the majority in the parliament and ministers from his cabinet.

“A lot of work is ahead us in the parliament for implementing the Prespa agreement. Together we will align the amendments to the Constitution. Together we will work on reconciliation, forgiveness and national unification,” Zaev said.

He repeatedly said he hopes that the country’s interests will prevail "beyond the party interest" of VMRO-DPMNE and urged other opposition lawmakers to join the upcoming process of changing the Constitution.

If the government had failed to put together the two-thirds majority to support the deal, then Macedonia would have held early elections.

Greek Prime Minister Alexis Tsipras, who took the helm of the foreign ministry after the recent resignation of Nikos Kotzias after a row over the name deal in Athens, hailed the successful vote and congratulated his peer Zaev.

The entire process should be finished by March as Tsipras wants to make sure it is completed before Greece’s 2019 general election that may change the composition of the Greek parliament.

“We now expect the national procedures for the implementation of the agreement to continue without any delays, towards the adoption of the constitutional changes,” it said.

They expressed full support for the country, its citizens and institutions.

Ahead of the vote, VMRO had been under pressure from international actors to support the deal. Recently EPP head Joseph Daul said in a tweet that as important decisions loom for Macedonia and the entire region he was “disappointed by the opposition’s role in the process to date,” and added “constructive co-operation must prevail over boycott.”

Many Western senior politicians visited Macedonia before the referendum to convince citizens to support the deal. Now, US Deputy Assistant Secretary of State for European Affairs Matthew Palmer is due to arrive in Skopje on October 22 to meet senior government officials and also representatives of the opposition party.

Last month, Washington accused Moscow for launching a disinformation campaign against the deal, claiming that it was the reason for the low turnout in the September 30 referendum.