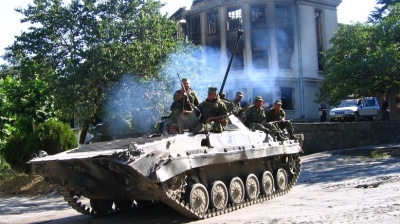 The war between Russia and Georgia over South Ossetia broke out in August 2008.
By Chris Weafer of Macro-Advisory July 28, 2021

Over the past year the coronavirus pandemic has tried our patience, as well as our health, Russia was hit with more economic sanctions and Moscow endured extreme weather conditions. One may be forgiven for thinking that Russians have endured the worst that nature and politics can throw at them and should now look forward to a quiet holiday month. Not quite. History has repeatedly shown that August is a month when surprises, usually bad, can happen more often than in any other month. It is very rare for August to pass without a legacy event, whether a major accident, environment disaster or political event.

That said, August 2020 was one of the rare exceptions. The continuing COVID-19 restrictions ensured that cities and towns were much quieter than usual. Travel, both domestic and international, was difficult and many people worked from home or their dachas. The most notable event of last August was the approval for use of the Sputnik-V vaccine. Russia was criticised for fast-tracking the vaccine approval (it skipped the Phase 3 testing) and there were no queues of people eager to get the jab. The level of vaccine scepticism is still high although queues are now longer after some city administrations made it mandatory for workers in many service sectors and for entry to cafes and events.

So, what of this year? We have the almost seasonal warnings from retired Nato officers and Ukraine nationalists that Russia is preparing to invade Eastern Ukraine. The phrase “this year it is different” is an equally traditional part of their argument. President Vladimir Putin’s recent op-ed, where he talked about Ukrainians and Russians being one people, certainly added vigour to the arguments. But there is no realistic reason to assume this will happen. The timing and content of the op-ed had more to do with the US-German negotiations about NordStream 2. It is possible that some test gas may come through the pipeline in August, but technical details are being deliberately kept vague.

The most important of the events scheduled will be the court verdict in the Baring Vostok case. This is scheduled for August 2 and is being closely watched by investors. The case started with the arrest of Mike Calvey, Philippe Delpal and several colleagues in February 2019. It has already added damaged Russia’s investment case and delayed some planned investment projects. The court verdict will either start to address that with an acquittal (unlikely), or add to the damage if the verdict is deemed harsh and especially if any of the defendants are handed further jail time.

The other big concern is about the environment and the effect of climate change in Siberia and in the Arctic region. The former is already enduring forest fires, which started earlier this year, and the latter is at risk of damage from the melting permafrost. It appears to be more a question of what will happen and when, rather than if.

Domestic politics should be quiet this year. The Duma elections will he held on September 19 and protests usually take place in the weeks ahead of that. This year it had been expected that supporters of jailed activist Alexei Navalny would hold a summer series of protests but, so far, there has been nothing. Also, the government has timed the payment of family supports for August to ensure a feel-good factor coming up to the election.

In general, the economic news remains very positive as most macro indicators are bouncing strongly. The only negative is the rising inflation rate, especially in food categories, and the resulting jump in debt service costs. This is something that President Putin is paying close attention to and may instruct additional measures in August if the rate continues to climb.

On the geopolitical front, Washington has confirmed it will bring one more set of sanctions. This is related to the Chemical and Biological Weapons (CBW) legislation and the investigation into the Navalny case. The sanctions are overdue in that they could have been announced from early June. It is hoped that the delay means the measures will be purely political or mild in impact, i.e., have no economic or investment impact.

As stated, historically, major political events, both domestic and geopolitical, have not been uncommon in August. The Molotov-Ribbentrop Pact was signed in August 1939, and construction of the Berlin Wall started in August 1961. Soviet troops entered Prague in August 1968, and in August 1991 there was an attempted coup against Mikhail Gorbachev by those looking to prevent the break-up of the Soviet Union. August 1999 was when Boris Yeltsin promoted a relatively unknown Vladimir Putin to the post of prime minister. The Russia-Georgia war provided the backdrop to August 2008.

As this July draws to a close the country’s finances are in the best shape ever, and that looks set to continue as the oil price averages almost $30 per barrel more than assumed in the budget. This is a long way from August 1998 when Russia defaulted on domestic debt, an action that led to the rapid devaluation of the ruble and the collapse of a big portion of the banking system. In August 2014 there was another big hit to the economy when sectoral sanctions were met with a retaliation that banned the import of food from most Western nations. August 2014 also saw the start of the collapse of the oil price, which directly pushed the economy into recession and, in combination with sanctions, led to 25% food inflation and some shortages the following winter. On a more positive note, Russia ended almost 19 years of stop-start negotiations and was finally admitted into the World Trade Organisation in August 2012.

Nature has also been very unkind to Russia in August. In 2002 widespread fires raged in the peatlands around Moscow and blanketed the city in a toxic haze. August 2013 brought very destructive flooding to much of Russia’s Far East, which led to both expensive economic disruption and loss of life. The worst weather-related disruption came in August 2010 when large swathes of the country were hit with high temperatures and forest fires. That combination contributed to drought conditions across much of the farming belt and led to a big drop in the year’s harvest. In fact, it was this combination that persuaded Putin the country’s reliance on imported food (55% of consumption that year) and medicines was not only bad economics but a national security issue. The origin of what we now refer to as the ‘localisation’ policy was in August 2010.

August can be an accident-prone month, such as in August 2000 when there were several serious accidents including the sinking of the Kursk submarine and a fatal fire in Moscow’s landmark Ostankino TV tower. In August 2006, 170 people died in an aeroplane crash on a flight from the Black Sea resort of Anapa to St Petersburg. In August 2005, the first case of avian flu was reported and while thankfully that did not develop as had been feared, it did lead to a sense of heightened concern for the month. In August 2009 one of the country’s largest hydropower stations suffered a catastrophic explosion in which 75 people died.

In August 2007, a group of nationalist politicians paid for a mini sub to take them to the floor of the Arctic Ocean where they planted a Russian flag in support of the country’s claim to sovereignty over the Lomonosov Ridge.

August 2021 will not be uneventful. That is already clear. The only question is whether it will take its place in history as a month when the economy or the environment took another hit. Or, maybe it will be a month when something more positive happens? Unfortunately, history favours the former.

Chris Weafer is the founder and CEO of the Macro-Advisory consultancy based in Moscow.

Russian banks extend profits in August, on track to earn a record RUB2.5 trillion this year
Russia’s PPI inflation up 1.5% to 28.6% in August
Russia's Renaissance Insurance hopes to raise $290mn with IPO

A case filed by Armenia against Azerbaijan in the International Court of Justice could have significant implications for the conflict. And it carries risks for both Armenia and Azerbaijan.

In the push for reducing carbon, significant investment will be necessary, and in turn, funding will be required. This will provide growth for the credit market, and in particular for anything associated with ESG.

In times of crisis there is a fight to quality by bond traders who are keen to reduce their risks. However, in this crisis the countries of Central Europe have done surprisingly well thanks to ECB support.

With the rapid economic recovery phase now behind us and the peak of the fourth COVID wave just ahead, the Romanian economy is starting to feel the need for additional growth drivers.

The Communist Party of the Russian Federation massively improved its standing following the elections for a new Duma, but was robbed of the much larger share it actually won. The question now is what – if anything – can the KPRF do?